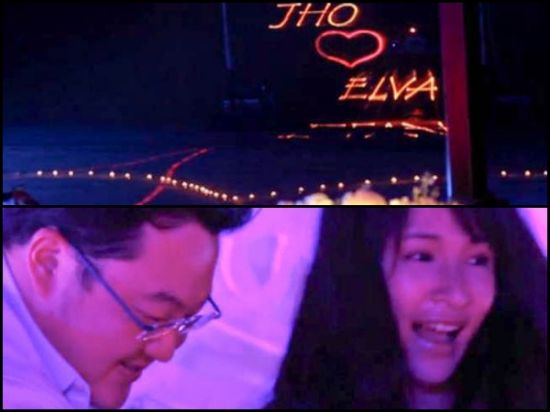 Flamboyant billionaire Jho Low is back in limelight, once again, with another story of an extravagant but sadly futile attempt at wooing the heart of another major celebrity- famous Taiwanese Mandopop singer Elva Hsiao.
Jho Low, considered by many to be the Dan Bilzerian of Malaysia because of his over-extravagance and partying habits
Taiwanese online media portal Apple Daily reported the billionaire’s multi-million dollar proposal after coming across an alleged video recording documenting Low’s proposal.
The online media portal cites a video uploaded about a year ago to video-sharing site, Vimeo.com, by British-based professional photographer Peter Rear.


The video that was titled, ‘Atlantis Engagement, Dubai’, did not mention the identity of the couple but contained an eye-opening caption; ‘Surprise engagement proposal rumored to cost £1m (RM 5.5 million).
The extravagant cost of the proposal comes as no surprise considering it took place on the private beach of Atlantis, The Palm- a world-famous hotel on the island of Palm Jumeirah, off the coast of Dubai; famous for it’s extravagant tenant costs.
Atlantis- The Palm, is heralded by many as one of the most luxurious getaways in the world
The 5-minute long video depicts the couple arriving to the beach in high-style- in a blacked out Rolls-Royce and strolling on the beach, where candles laid out romantically in a Valentine heart shape.

Someone’s been reading one too many love novels


Out on the sea, a giant neon-lit backdrop hung between two yachts that read “Jho (Hearts) Elva” lit up the dim evening waters.
Clearly a luxury exclusive only to the top 1%
The couple then proceed hand-in-hand to a luxurious set to dine- claimed to be the work of Dubai’s world famous architectural and interior design firm, Ali Bakhtiar designs- as lasers show outlines of the couple’s silhouette.
The couple then enjoyed their dinner prepared by a five-star chef, while being serenaded by a harpist and a violinist- playing a violin embedded with precious stones.
The romantic atmosphere is disrupted when several parachutists descend from the sky onto the beach, James Bond style, to present Hsiao with jewellery custom made by Swiss luxury brand, Chopard.
The jewellery is rumoured to be a pendant-and-necklace set estimated at a mind-boggling RM83,500.

The outrageous extravagance and flair of near-unattainable luxury moved Hsiao to the brink of tears, but was not enough to move her heart.
Apple Daily reports that the 33-year-old Mandopop star rejected the proposal and only saw 31-year-old Low as a ‘little brother’.
The very beautiful Miss Hsiao
However, despite the rejection, the night ended with a million-dollar fireworks show that lit up the night sky with dazzling lights.
Maybe, it’s a little over the top… Just maybe..
The online media portal also reported that a spokesperson had denied claims that Low had proposed to Hsiao at the event, stressing that it was just a “romantic dinner”.
Penang-born Low, who is reportedly part of Prime Minister Najib Abdul Razak’s social circle, is well known for his flamboyant attempts to woo American socialite Paris Hilton and his high-rolling partying habits with his A-list friends from the United States. These parties can cost up to the millions.

A flustered Low alongside Paris Hilton in a picture taken from some time ago
Low, whose real name is Low Taek Jho, is the son of a tycoon Penangnite who reportedly has close links with Middle Eastern investors and has been nicknamed as the Dan Bilzerian of Malaysia.
The billionaire ‘playboy’ is also reportedly involved with the Terengganu Investment Authority (TIA) – now known as the 1Malaysia Development Bhd (1MDB) – and UBG Bhd, which is owned by the family of Sarawak Chief Minister, Abdul Taib Mahmud.
Low made it into the spotlight two years ago after reports of his extravagant partying habits with Hollywood actress and socialite Paris Hilton made headlines in both local and international papers.
The songstress is currently reported to be dating Taiwanese actor Kai Ko, who is 12 years her junior.
Looks like Kai Ko has quite a challenge to step up to after Low’s extravagant proposal
The pair is said to be holidaying together in Bali.
Mandarin Name: Elva HsiaoCantonese Name: Elva Siu Chinese Name: 萧亚轩 Birthdate: August 24th, 1980Nationality: TaiwaneseHeight: 162cm Weight: 47kgReligion: BuddhismBlood Type: A Chinese Horoscope: Sheep Zodiac Sign: VirgoBirth Place: TaiwanEducation: University; major in design of John Casablancas (CollegeVancouver)
Source from: https://thecoverage.my/news/malaysia-billionaire-jho-lows-rm5-5-million-failed-marriage-proposal-to-elva-hsiao/