Dr M: We roughly know where Jho Low is 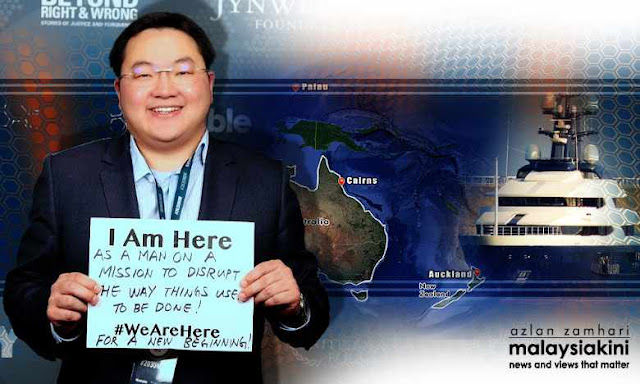 Prime Minister Dr Mahathir Mohamad has revealed that the government “roughly knows” the whereabouts of the elusive businessman Jho Low.
However, he said an official request to extradite him to Malaysia has not been made.
“I don't go around to catch people,” he quipped.

Jho Low living it up between Shanghai hotel and super yacht

Businessman Low Taek Jho, or Jho Low, is spending his time between a gigantic luxury superyacht and a luxurious hotel in Shanghai, according to a report in The Australian.
The report said The Equanimity, which it described as a floating palace, was traversing the sea off the coast of West Papua.
Jho Low has been named as a central figure in an international investigation into what The Australian describes as “the multibillion-dollar looting of Malaysia’s sovereign wealth fund, 1MDB”.
Low is said to be splitting his time between Equanimity’s gold-plated interior and the equally luxurious Peninsula Hotel in Shanghai, overlooking the Huangpu River, according to the report.
The report added that “despite his closeness to Prime Minister Najib Razak, Low reportedly has been warned off returning to Malaysia”.
In the past six months, it said, the yacht had been seen cruising the seas of Southeast Asia on a tour taking in Cambodia, Thailand, Bali and some of Indonesia’s tiniest islands.
Australian investigators, the report said, missed their chance to lay hands on the A$165 million super yacht when it pulled into Cairns for a pit stop in March last year.
According to US court documents, it is during a frolic on Equanimity in 2014 that Low gave his then girlfriend, Australian supermodel Miranda Kerr, a diamond jewellery set worth US$2 million – money the US Department of Justice (DoJ) said was directly traceable back to 1MDB.
“The excursion was planned at Low’s direction by a high-end concierge service, and meticulous planning went into arranging the manner in which Low would present each piece of the matching diamond jewellery set to Kerr,” the DoJ said in a US Federal Court filing last month. Kerr has since returned the gems.
The DoJ has accused Low and his associates of using complex webs of tax haven companies to siphon money away from 1MDB, which was set up by Najib with the stated purpose of “driving the sustainable long-term economic development and growth of Malaysia”, and spending a chunk of the proceeds on luxuries for themselves.
The “looting of 1MDB” is being investigated in nations such as Singapore, Switzerland, and the US. Singapore has, in fact jailed some participants of 1MDB-related transactions and closed units of certain banks and fined others, while the US has seized properties it says had been bought using stolen 1MDB money.
Malaysian police, meanwhile, say they are still investigating the matter. Najib has consistently denied any wrongdoing, while 1MDB says nothing has been stolen.
Now, however, the Australian police have begun their own investigations into the affair.
The report said Australian police were investigating whether any proceeds of the alleged crime might have ended up in Australia.
It said the line of inquiry might lead to New Year’s Eve 2012-13 and an extraordinary continent-spanning party involving Hollywood stars Leonardo DiCaprio, Jamie Foxx and others.
The report noted that the Australian bank ANZ and construction company Lendlease, which had signed a contract to work on the Tun Razak Exchange, would also be feeling the heat.
ANZ part-owns AmBank where Najib had accounts into which US$681 million was deposited. Najib said it was a donation from the Saudis, and the attorney-general cleared him of any wrongdoing.
The report went on to give details about the New Year’s Eve gathering in Sydney, including some of the big names present. It said the entire extravagant spree was funded by Low.
After the midnight fireworks, the revellers boarded a 747, apparently chartered from US operator Atlas Air, for the flight to Las Vegas, US, where the celebrations continued, according to the report.
Foxx, the report said, told British TV host Jonathan Ross a couple of weeks later: “I’ve got a friend, he’s got some money, he’s got some money. He flew me, Leonardo DiCaprio, Jonah Hill and some other cats – we flew to Australia. We did the countdown in Australia, then jumped back on the plane, then did the countdown in Vegas. That’s crazy.”
The Australian said an Atlas Air spokesman declined to comment when contacted.

The Low family had longstanding links to Australia through Jho Low’s father, Larry Low Hock Peng, the report said, going on to give some details of his business activities in Australia.
It quoted an unnamed former business associate of Larry Low as saying: “All I know is the Low family is megabucks. At night-time they knew how to party – karaoke bars, cigars. If they’ve come to Australia and left, they made plenty of money.”
However, the only Australian asset so far definitely linked to 1MDB can be found on Queensland’s Gold Coast.
The coast is home to Avestra, a funds management group linked to Bridge Global, a Cayman ­Islands fund manager that allegedly was used to hide some of the financial black holes in 1MDB, according to The Australian.
The DoJ said this “involved a series of complicated and commercially unnecessary transactions. The transactions had no economic substance, amounting to a round trip of various securities and commercial paper that were designed to, and did have, a specific and false accounting effect – namely, the fraudulent inflation of the value of 1MDB’s assets.”
The report said Avestra was being liquidated after court action by the corporate regulator.
The Gold Coast is also where Singaporean banker Yeo Jiawei, a friend of Jho Low, accumulated a multi-million-dollar property portfolio including shops and a A$1.3 million apartment in the luxury Soul building.
Yeo, a former wealth manager at Swiss bank BSI, has been jailed in Singapore over the 1MDB affair.