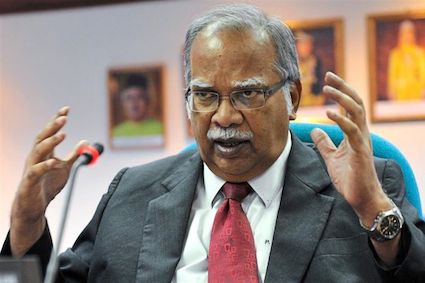 The most qualified person to be considered for the post is none other than Kit Siang. He spend years fighting for democracy and justice at the expense of his family life. He was imprisoned twice under the ISA for his political activities.
By P Ramasamy, Berita Daily
Of all the leaders of the political parties, on both sides of the divide, the humblest person is none other than the DAP veteran leader, Lim Kit Siang. He is the prime candidate to be considered for the number one post in the country. However, whether he wants it or not is a different mater.
Kit Siang has all qualities of a great leader, but he has never aspired to become the prime minister of Malaysia.


Whenever his name is mentioned, he would brush aside such suggestions as not being important, or even irrelevant to needs of the Malaysian politics. In short he wants to pave the way for others to succeed.
The opposition to the idea of Kit Siang becoming the prime minister of Malaysia mainly emanates from the racist and bigoted Umno circles. It is not because these groups care much about Kit Siang, but more interested in driving a wedge between DAP and other Malay-based parties in Pakatan Harapan.
There is thinking that is being derived from the past, if they can divide the Pakatan coalition partners along race and religious lines, the actual beneficiary would be Umno, a party that is struggling to remain relevant in Malaysian politics.
The constant statements from Umno circles that DAP is using Pakatan for the political ascension of Kit Siang is reminder of how race and religion have been used by those in power to divide and separate the various races in the country.
The very fact that Kit Siang is member of the Chinese community has nothing to do with his ability or inability to become a national leader or prime minister of the country.
While it would be difficult to ride the wave of ethnicity and religion at least for the time being, Kit Siang has all the qualities to be considered for the post of prime minister.
He has spent a major part of his political life in struggling for the opposition to bring about a better Malaysia.
There is not need for Malaysia to wait a long period for a non-Malay to be considered as a prime minister material. In this respect, the example of Barrack Obama is not a good example.
Malaysia need not wait for few hundred years for a non-Malay to become a prime minister.
The most qualified person to be considered for the post is none other than Kit Siang. He spend years fighting for democracy and justice at the expense of his family life. He was imprisoned twice under the ISA for his political activities.
It is not that Kit Siang is greedy for power like some others. He speaks forcefully in the parliament and on issues that affect the wellbeing of Malaysians, but otherwise he is very unassuming person.
He would shy away from position of power and influence. He is natural leader.
When he was asked why he was not considered to be in the Pakatan national line-up, he dimissed the question by saying that it was not important. He always ensured that if his presence complicates the situation, he is the first leader who would move away from being considered of the post or included in any line-up.
Unlike some others who are motivated by consideration of power and greed, Kit Siang is a breath of fresh air. His overriding perspective is to bring about political change for the betterment of the country and its people.
If you turn back the pages of history, Kit Siang to his credit had exposed so many political scandals. For these he was not rewarded by the regime in power, but put behind bars or hounded like like a “common criminal”.
Without the towering presence of Kit Siang, Penang and some other states would not have fallen to the opposition in the political tsunami of 2008 and 2013.
We in the DAP look up to Kit Siang for his constant guidance as how to move in the muddy of waters of racism and religious intolerance.
Kit Siang might be in his mid-70s, but he is ever vibrant. He is constantly moving around he country giving speeches and press conferences. If DAP is considered the strongest party in the Pakatan coalition, then the credit must surely go to Kit Siang. Whether Kit Siang is formally present in the Pakatan structure is not important.
However, in the larger interest of bringing about political change, Kit Siang is willing to take a back seat to allow others in the forefront. He thinks that if his presence might complicate things, he willing to make the sacrifice.
Malaysians need a decent, responsible, honest and brave leader to become a prime minister. I think Kit Siang is the best leader to become the prime minister of Malaysia. He has all the right credentials. More than this, he has sacrificed for the country.
Whether he would aspire to become a prime minister remains to be seen. Chances are that he is not interested for various reasons. But one thing is for sure, he wants Pakatan to form the next national government.
P Ramasamy is Penang Deputy Chief Minister 2
-MalaysiaToday-