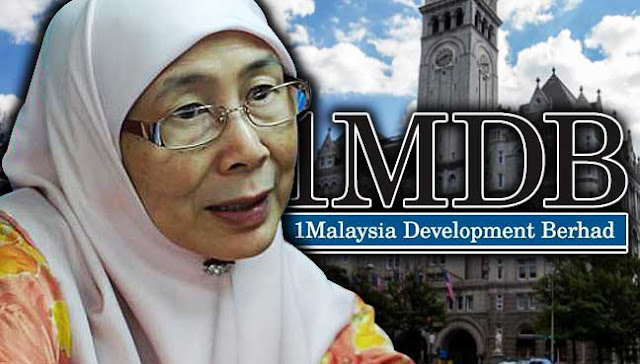 KUALA LUMPUR: Parliamentary opposition leader Dr Wan Azizah Wan Ismail has criticised the Dewan Rakyat speaker’s move to reject her question on the cost of the Malaysian delegation’s accommodation at the Trump International Hotel in Washington last month.
The Permatang Pauh MP had sought a reply from Prime Minister Najib Razak on the costs incurred by the government for the trip to meet US President Donald Trump at the White House on Sept 12.


“What happened today was a desperate act by the Barisan Nasional government, led by Najib, which has manipulated the office of the Dewan Rakyat speaker to block a question submitted to Parliament,” she told a press conference outside the house today.
The PKR president added that three other questions on the 1Malaysia Development Bhd (1MDB) issue from her had also been rejected.
One of these was on whether the attorney-general had initiated criminal prosecution on the issue under the Exchange Control Act 1953, as recommended by Bank Negara Malaysia (BNM).
She also asked how far 1MDB had complied with BNM’s directive to bring back an alleged RM7.8 billion in overseas investments after its three investment permits were cancelled.
The third question on 1MDB was on whether Najib had raised with Trump the issue of the US Department of Justice (DoJ) seizing assets allegedly purchased with funds linked to the sovereign wealth fund.
Several other MPs had also raised similar questions and found they had been rejected as well.
Amanah’s Shah Alam MP Khalid Abdul Samad said he had 10 questions disallowed in the current sitting of the Dewan Rakyat.
In the last sitting in July, the speaker had rejected some 30 questions from opposition lawmakers on the issue of 1MDB.
Opposition MPs had submitted a motion under Standing Order 99 to seek a review on the decision to reject the questions.
Wan Azizah said more than 60 MPs had supported the motion, but it was still rejected without any reason given.
The issue of the Malaysian delegation’s stay at the hotel linked to Trump had been raised at a press briefing in the White House after the meeting between Najib and Trump.
White House press secretary Sarah Huckabee Sanders was asked if the issue had come up in conversations with Trump during their meetings, and whether it was “problematic for someone under DoJ investigation to be supporting the president’s for-profit company”.
Sanders replied: “I’m not sure about … if that came up. I’m not aware that that was ever discussed. And we certainly don’t book their hotel accommodations. So, I couldn’t speak to the personal decision they made about where to stay here in DC (District of Columbia).”
To a question as to whether she thought this was “in any way any sort of attempt to curry favour with the president”, Sanders had replied: “No, I don’t.”
-FMT NEWS-