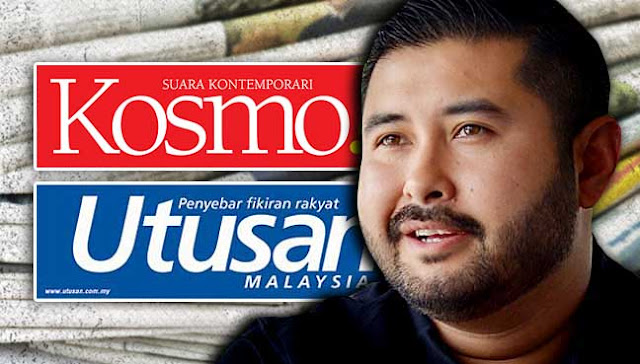 After a dialogue of more than an hour regarding football and current issues, only the joke in my last 20 seconds of my dialogue is trending now. This is one of the reasons why I don’t read newspapers in this country anymore.

Their persistence to sell the newspaper have resulted in them writing news and articles similar to a gossip magazine. To my foreign friends, this is a true example of the now infamous slogan “Malaysia Boleh”.

This is the mentality of our Malay society in some places in Malaysia. Every month, millions are given to Kosmo which is under the Utusan flagship but their main purpose is only to instigate people and write news such as cheap gossip.


My advice to the government, it may be best if you just shut this newspaper company down rather than wasting people’s money.

You want everything to be free without putting any effort or hard work in and at the same time despise the fact when others are doing well.

When a long article is written, people are lazy to read. There are even some that may not fully understand. Even when a live video is broadcasted, they still can’t comprehend?

I’ve been informed regarding efforts to enhance the education system in this country and I think the authorities need to execute it as soon as possible because there are 3 crucial factors that should be given attention in the country.

The lack of education, bribery and extremism. If it continues, the future of our kids and grandchildren will be bleak.

Regarding the statement that I wanted to meet the “red cap” boy, let me reiterate that we’ve already met before when he was giving ideas towards pressuring the previous FAM leadership.

Now I would like to ask him and all football fans, what makes them unhappy right now? What can I do for him or the others?

I really want to ask for myself what do they really want from FAM at this present moment. If there is in fact really anything.

FAM has now established a good relationship with the supporters, unlike the previous FAM.

So please, do tell me when we can meet. I was just asking to meet and suddenly it’s as if the whole nation is crumbling down.

No one took note of the important issues but the joke or the small talk was given the limelight. Malaysia…

The above was first posted on the Facebook page of Johor Southern Tigers. Tunku Ismail Sultan Ibrahim is the crown prince of Johor and president of the Football Association of Malaysia.

The views expressed are those of the author and do not necessarily reflect those of FMT.