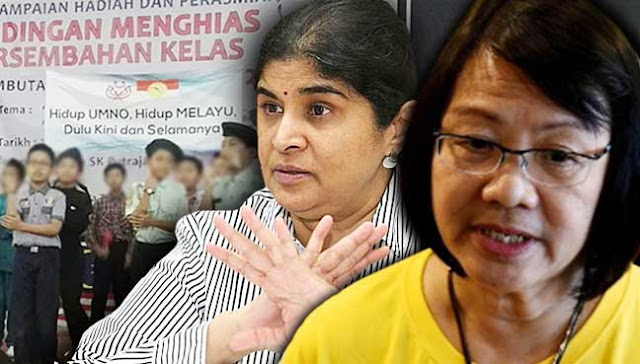 PETALING JAYA: Politicians and an activist have slammed Federal Territories Minister Tengku Adnan Tengku Mansor for abusing his powers to promote Umno in school instead of helping the government to promote quality education.

Bersih 2.0 chairman Maria Chin said he should not mix politics with the functions of the government.

“It is an abuse of power. He is the government of the day and should not be mixing both.
“People vote the government to run the country for them and not to abuse it outright to recruit students. It is out of line,” she said.

Maria was asked to comment on a report that hundreds of pupils and teachers from SK Putrajaya Presint 14 (1) took part in a “class decoration and performance” competition with the theme “Umno and independence #Negaraku”.

During the function, Umno flags were draped all over the primary school.

Tengku Adnan, in his speech, had urged teachers to join Umno. After the minister finished his speech, the pupils chanted “Hidup Umno!” (“Long live Umno!”).

“Children should never be dragged into partisan politics in their schools. This is clearly a sign of desperation by Umno.”

What about poor performance in schools?

DAP’s Charles Santiago said the government should be looking at helping students to acquire knowledge and not stressing on Umno’s survival in schools.

“This is wrong. Education should be set independent from the system of government.

“The government’s role is to ensure the students are learning and acquiring knowledge. The teachers should be communicating knowledge. But here it is a reversal,” he said.

The Klang MP added the students would be indoctrinated that there is only one party in the world and that is Umno. “Their protector and saviour. They can do no wrong.”

He wants the headmaster of the school, Mohd Amin Hamzah, to be reprimanded by the education ministry for supporting the role of Umno in schools.

“He thinks it is fine. This is a problem,” he said.

Santiago was referring to Malaysiakini’s report where Amin was quoted as saying the school had not violated any rules. He explained that the theme was set by the Federal Territories ministry.


Santiago said during visits to schools in Selangor, the principals would not greet the politicians as it was the parent-teacher association board members who would do that.

DAP parliamentary leader and Gelang Patah MP Lim Kit Siang said a government which had lost the ability to differentiate between right and wrong forfeited the right to be the government.

He said the BN government must be replaced by Pakatan Harapan “before Malaysians suffer more shame, indignity, infamy and ignominy”.

He said what happened at the school was the latest proof that the federal government had become a “morally bankrupt coalition”, adding that former prime ministers would never have approved or authorised such an event.

He noted that the school event only glorified Umno without acknowledging the contributions by other BN component parties like MCA, Gerakan, MIC and East Malaysian parties.

He said Tengku Adnan also had to “openly beg” teachers to join Umno.

Lim said this indicated that Umno had lost the support of the majority of Malays and civil servants in the country.

“The future of the civil service does not and must not depend on the fate of the Umno/BN coalition, which is going downhill.

“It is just irresponsible fear-mongering on (Prime Minister) Najib Razak’s part to stoke fears among Malay civil servants that a Pakatan Harapan general election victory will ‘gamble’ away their future and those of their descendants.”
-FMT NEWS-