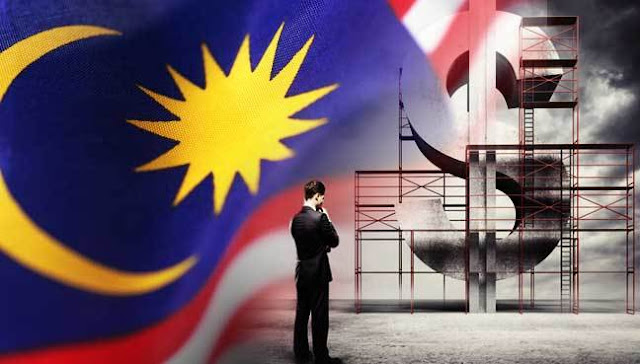 By Jomo KS and Raisa Muhtar

Malaysia has a problem with debt. Government debt is about 53% of GDP, just below the already increased 55% debt-to-GDP ratio threshold. The big jump in such government debt from 41% in 2008 to 53% in 2009 followed the last change of prime ministers.

Recently, the government has been borrowing from abroad at an unprecedented pace. The latest level has been attributed to an increased domestic debt of RM15.8 billion and additional foreign debt of RM2.2 billion last year.

Also, by encouraging Malaysian investors, both private and public, to invest abroad, and by sharply increasing borrowings and portfolio investments from abroad, the country has unnecessarily become much more vulnerable to international financial volatility and instability.

An unexpected shock to growth, an interest rate in the West (e.g., with the end of ‘quantitative easing’ [QE]) or the sudden exit of foreign portfolio investments would all threaten the Malaysian economy due to its greater self-induced vulnerability.


Most current contingent liabilities abroad have been accrued after the last Prime Minister’s tenure. Tun Abdullah’s reduction of the budget deficit bolstered the country’s debt ratings, making it cheaper for the federal government and government-linked companies (GLCs) to borrow overseas at a time of QE-induced low-interest rates in the OECD economies.

Such debt has more than doubled since Prime Minister Najib took office in 2009, as government-related entities borrow abroad to fund infrastructure projects and ventures such as 1Malaysia Development Bhd (1MDB). This is quite unprecedented as most new foreign borrowings have not been invested in ways likely to generate foreign exchange earnings.

Such government spending is needed to sustain growth, but all too often, has been abused to fund large-scale projects for crony companies (‘jobs for the boys’) with ‘kickbacks’ for key decisionmakers. The growing burden of such debt is inevitably borne by tax-payers.

Malaysia’s relatively high contingent liabilities include those due to public-private partnerships (PPP) where the government or GLCs bears the bulk of the risk, while the lion’s share of profits goes to the typical crony private partner.

Meanwhile, contingent liabilities associated with 1MDB’s default in August have been estimated at 2.5% of gross domestic product (GDP). According to Moody’s Ratings Services Vice-President Christian de Guzman, 1MDB, which defaulted after missing a bond repayment deadline, raised the risk for contingent liabilities the government is exposed to, increasing the cost of government debt from abroad.

Recently, Malaysian authorities established the Fiscal Risk and Contingent Liability Technical Committee to evaluate the government’s fiscal risks and to propose appropriate measures to address them. After failing to meet previous targets, the authorities have promised, yet again, to achieve ‘near-balance’ for the federal budget by 2020.

But such promises may not have renewed confidence, especially as the deployment of borrowed funds by 1MDB and some other GLCs has not convinced the market that public finance management in Malaysia is improving irreversibly.

The views expressed are those of the author and do not necessarily reflect those of FMT.