Mahathir: Umno song in school like a country under dictatorship 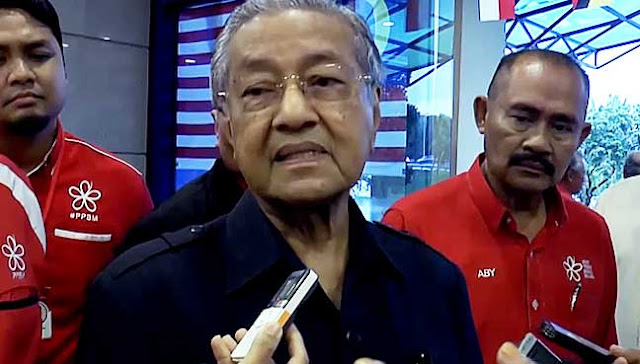 PETALING JAYA: Dr Mahathir Mohamad today compared the act of a national school in Putrajaya which allegedly made its pupils sing the Umno party song with that of a country that practises dictatorship.

“And now it has spread to Malaysia,” the Pakatan Harapan (PH) chairman told reporters when met at the PPBM headquarters this evening.

The former prime minister said in his 22 years as Umno president, he had never resorted to such measures in which government facilities such as schools were used to promote a political party.

“This government does not practise the rule of law. They do as they please. But I am certain the people know the government is abusing its powers. And this will help us get more votes,” he said.

His comments followed those of DAP secretary-general Lim Guan Eng, who earlier likened the event to the kind of reception usually given to North Korean leader Kim Jong Un.

Yesterday, it was reported that students from SK Putrajaya Presint 14 (1) were made to sing the Umno party song and wave the ruling party’s flag during an event attended by Federal Territories Minister Tengku Adnan Mansor.

Hundreds of pupils and teachers were said to have taken part in a class decoration and performance competition themed “Umno and independence #Negaraku”.

Umno flags were also evident across the school compound.

At one point, a banner with the words “Hidup Umno, Hidup Melayu. Dulu, Kini dan Selamanya” (Long live Umno, long live the Malays. Then, now and forever) was reportedly displayed on stage.

In his speech, Tengku Adnan, who was there to present the prizes to the winners of the competition, also urged the teachers to join Umno.

The school has since defended its actions, with the headmaster Mohd Amin Hamzah denying that the school had violated any rules by allowing a political party to be celebrated on its premises.

Amin added that the theme for the competition had been set by the ministry.

The explicit display of politics at a school event drew sharp criticism from several quarters who accused Tengku Adnan of turning the teachers and students into political tools.

However, earlier today, Chief Secretary to the Government Ali Hamsa said he had no problem with Tengku Adnan calling on the teachers to join Umno.