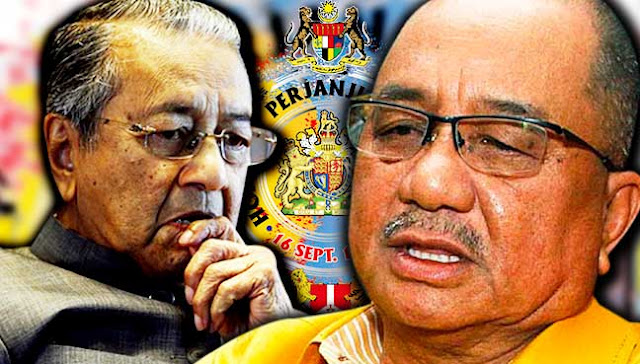 KOTA KINABALU: Parti Harapan Rakyat Sabah president Lajim Ukin has cautiously welcomed a promise by Pakatan Harapan (PH) chairman Dr Mahathir Mohamad to review the Malaysia Agreement 1963 if the opposition coalition wins the 14th general election.
“I hope when he wins, he will remember this promise and redeem himself after decades of transgressions against Sabah and Sarawak during his tenure as the prime minister,” he told FMT.


Lajim, who was an Umno supreme council member between 2000 and 2003, said he always respected Mahathir as a leader of the country but the former premier did not care much about Sabah and Sarawak.
“I think this has always been the policy of the federal government. Mahathir did not like to think about the Bornean states.
“If he had, Sabah would have been better off than we are now. I think we would have been on par with the states in the peninsula now,” he said.
During his time with Umno, Lajim said he always voiced his concern directly to Mahathir on Sabah’s affairs.
He said he reminded Mahathir that Sabah was in dire need of housing, education, infrastructure and many others while the people demanded to be treated as equals to their fellow Malaysians in the west.
Unfortunately, he said, Mahathir would brush off his comments despite acknowledging the Klias assemblyman’s concerns about Sabah’s needs.
“We are not jealous of what the peninsula has achieved, especially Kuala Lumpur because it is our national capital. But I told him Sabah and Sarawak must also grow together and at least reach the same standard,” he said.
Lajim recounted a case in 1994 when former deputy prime minister Anwar Ibrahim came to Sabah and promised to build 30,000 units of low cost housing.
After Anwar was fired from his post in 1998, Lajim asked Mahathir about the promise and when the project would commence.
“Do you know what he said? He said it was not his promise. It was Anwar’s. I asked him what the difference was because even though Anwar was fired, the government remained the same and he was the Prime Minister,” he said.
Lajim believed he understood Mahathir’s style of governance and the need to control by centralising everything, which was against the Malaysia Agreement.
Nevertheless, Lajim said, his party as well as the Sabah people would welcome Mahathir if indeed he realised his mistakes and truly wished to make amends.


This was because Mahathir’s coalition was now promising to give the Bornean states a 20% share in oil and gas revenue and to return 40% of the net revenue collected in Sabah to the state.
“If this is done, it means billions of ringgit that we can use to develop Sabah.
“We prefer to manage our own money and put into place our programmes to address our problems in education, poverty eradication, infrastructure development, unemployment and others,” he said.
Share to: