KL-Singapore high-speed rail to cost up to RM77 billion? 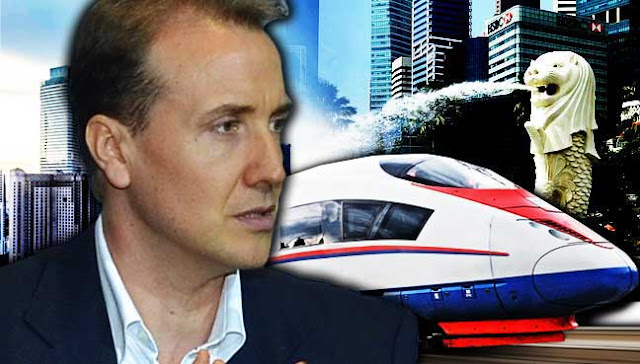 PETALING JAYA: The cost of developing the high-speed rail (HSR) linking Kuala Lumpur and Singapore is expected to be much higher than earlier estimated, a Singapore-based think tank revealed today.

A senior fellow of the Institute of Southeast Asia Studies (Iseas), Francis E Hutchison said that it could go up to as high as S$25 billion (RM77 billion).

“When YTL Corp Bhd provided the estimate for the high speed rail in 2006, the cost that they had proposed was S$2.7 billion.

“And then when the Malaysian government’s Pemandu did their own analysis via a series of labs, it was then revised to around S$5.5 billion. Now the latest I have heard is around S$20 billion to S$25 billion,” he was quoted as saying by The Edge, at a conference in Singapore today.

In July, Second Finance Minister Johari Abdul Ghani was reported to have said that the project cost will be about RM50-60 billion.

He said it shortly after Prime Minister Najib Razak and his Singapore counterpart, Lee Hsien Loong, had signed a Memorandum of Understanding on the HSR project.

Meanwhile, Hutchison estimated the bulk of the cost for the HSR development to be taken up for the civil infrastructure, covering the building of bridges and tunnelling.

“The civil infrastructure may cost around S$15 billion. The underground cost for the construction of the line is generally five times higher than the on-ground cost.

“The balance will be taken up by the laying of tracks, electrification and system integration, which is estimated to be about S$5 billion, and finally the train themselves, at around S$1.7 billion,” he was quoted as saying by the financial daily.

Hutchison added however, that the above still does not take into account the cost of land acquistion on both sides of the causeway.

The question of costs to commuters based on such high investment was also addressed by the Australian, who is senior fellow & coordinator on Regional Economic Studies Programme and Malaysia Studies programme in Iseas.

“Based on my calculation, the one-way ticket price between Kuala Lumpur and Singapore will cost around S$60 to S$65.

“I understand that the frequency of the high speed rail service is about four times an hour, one being an express non-stop service, and the other three times are for shuttle servicing the in-between intermediaries stop,” he was quoted as saying, comparing it with a similar express non-stop service between Tokyo and Osaka, having 14 trips per hour.

According to The Edge, Hutchison said to recoup the HSR project cost, the operator must determine between collecting fare and non-fare revenue, which may include hotels and malls, along the various stops, as is the case in Japan.

He also alluded to the Japanese bid for the HSR project being the better choice compared with the one from China, as “they tend to focus on the quality of their high speed rail, and the record speaks for itself”.
-FMT NEWS-