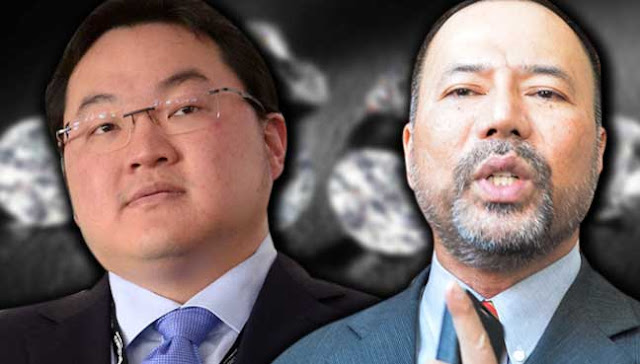 KUALA LUMPUR: Khairuddin Abu Hassan has filed an application to set aside a warrant which purportedly authorises a legal firm to represent Low Taek Jho in a suit demanding the return of a 22-carat pink diamond allegedly in the hands of Rosmah Mansor.

The former Umno leader said Messrs Ng Aik Guan did not have the authority to act for the businessman, also known as Jho Low, as the warrant was suspicious.


He also wants a declaration from the High Court that Jho Low was in default of the writ as his local agents declined to accept the court papers as they were not authorised to do so.
As a result, he said, the court on Aug 24 allowed him to advertise his lawsuit in two newspapers.

In the application filed this afternoon, through Messrs Syed Iskandar Syed Jaafar, Khairuddin said he believed Jho Low, whose whereabouts are unknown, is no longer in Malaysia.

He said Jho Low also holds a foreign passport and as such was no longer a citizen of Malaysia.

“The second defendant (Jho Low) has never surfaced in Malaysia or elsewhere to deny this fact,” he said.

He said on Sept 19, the legal firm wrote to his (Khairuddin) lawyers that Jho Low had appointed them to represent him but the letter did not produce proof of proper authorisation.
“This is because Jho Low is not in Malaysia and is absconding,” he said.

He said his lawyers wrote to the legal firm which responded by sending a warrant to act for Jho Low, purportedly signed by the businessman.

“However, a close examination of the said warrant to act reveals it is spurious,” he said.
He said his lawyers replied that they were disputing the firm’s authority to act for Jho Low.

On Aug 15, Khairuddin filed the suit seeking a court order for Rosmah to return the US$27.3 million (RM115 million) diamond set in a necklace to 1MDB, the sovereign wealth fund.

Khairuddin said 1MDB had obtained US$6.5 billion by borrowing from overseas lenders, and that the company was the beneficial owner of the money.

He alleged that Jho Low committed theft or criminal breach of trust of the said loans and had no title in law or in equity over the money.

The United States Department of Justice (DoJ) had filed two civil forfeiture lawsuits against assets worth US$1.8 billion that it claimed were bought with funds stolen from 1MDB.

The first suit was filed on July 21 last year in which the term “MO1” (Malaysian Official 1) was mentioned 36 times.

On June 15, the DoJ, in its court filings, said nearly US$30 million was allegedly stolen from the sovereign wealth fund and used to buy jewellery.

The filings lodged at the US district court in Los Angeles said the jewellery purchases were for the wife of “Malaysian Official 1”.

Rosmah and 1MDb have also filed an application to strike out the suit and Khairuddin will oppose the move.