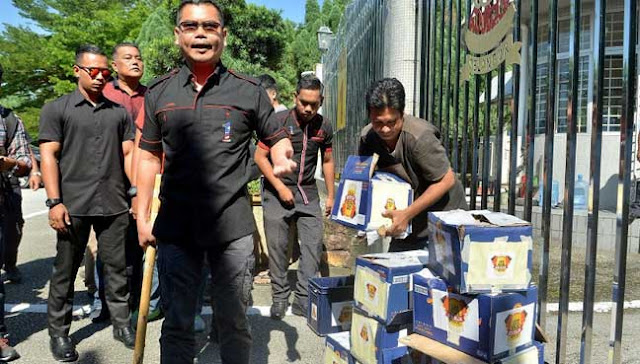 PETALING JAYA: Sungai Besar Umno division chief Jamal Yunos has been arrested over his beer-smashing stunt outside the Selangor state government office yesterday.
This followed reports that the Red Shirts leader is being investigated for unlawful assembly under Section 143 of the Penal Code.
In a statement carried by The Star this morning, Selangor CID chief SAC Fadzil Ahmat said Jamal and seven others were arrested in Sekinchan at 1.45am.
According to the report, they will be brought to the Shah Alam court to be remanded.
If found guilty, Jamal could face a jail sentence of up to six months, a fine, or both.
Jamal and his followers had carried out the stunt in protest of the Better Beer Festival 2017, which was scheduled to be held at the Publika Shopping Gallery in Kuala Lumpur this month.
The event was cancelled after the Kuala Lumpur City Hall (DBKL) rejected the organisers’ application to host it.
Jamal’s actions were condemned by Barisan Nasional (BN) component party MCA as well as Selangor Umno, which said he had acted in his capacity as chairman of the Malaysian NGOs Coalition.-FMT NEWS-