Jamal: I’d rather do time than see Selangor youths drunk 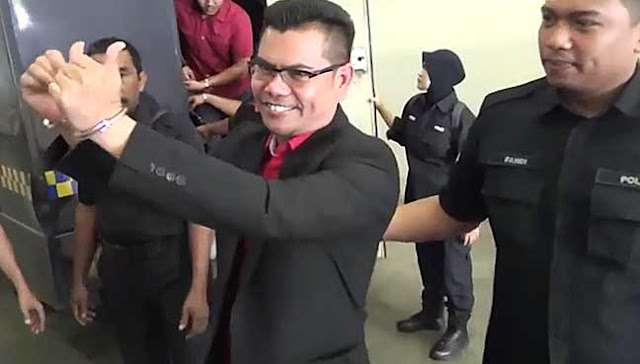 SHAH ALAM: Red Shirts leader Jamal Yunos today said he would rather be handcuffed and taken to prison than see youths in Selangor trapped in alcohol drinking, following controversy over a beer fest in the state.
The Sungai Besar Umno division chief, who was brought to the Magistrate’s Court here to be remanded after his arrest earlier today, said he did not want to see Selangor residents get drunk at a beer festival.
“Although I have been arrested and handcuffed, I cannot bring myself to see youths in Selangor become drunk under Azmin Ali’s administration. This is my message,” he said, referring to the Selangor menteri besar.

Jamal said this when met outside the court house today.
He also urged Azmin not to bow to pressure from DAP over the beer fest being held in Selangor.
“It’s not just the Malay Muslims who dislike alcohol. Chinese and Indian parents don’t want to see their children party, either.”
Magistrate P Sarulatha later ordered that Jamal be remanded for three days beginning today.
Using a sledgehammer, Jamal had smashed up cartons of beer outside the Selangor state secretariat building yesterday to protest against the Better Beer Festival 2017, following speculation that it would be allowed to be held in Selangor.
The beer fest was initially slated to be held at the Publika Shopping Gallery, but was cancelled after the Kuala Lumpur City Hall (DBKL) rejected the organisers’ application to host it. The police also refused permission, citing security reasons.
Azmin had said he would let the local authorities decide whether or not to permit the festival in Selangor.
Police detained Jamal and seven others early this morning under Section 143 of the Penal Code for unlawful assembly, and Section 268 for causing a public nuisance.
Acting Umno deputy president Ahmad Zahid Hamidi and Selangor Umno have distanced themselves from Jamal’s beer-smashing stunt.
Barisan Nasional component party MCA meanwhile condemned Jamal’s actions and called for him and his followers to be charged with littering, being a public nuisance, attempted vandalism and destruction of public property, criminal intimidation and harassment, and sedition.