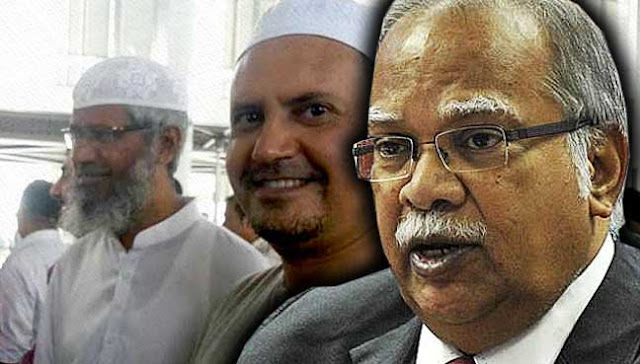 By P Ramasamy
Is it true that despite the denials by the Malaysian government, the controversial Islamic preacher from Mumbai, Zakir Naik, one of India’s most wanted fugitives, may be hiding in Malaysia?
Last week, a Facebook user uploaded a photograph of Naik at the Tuanku Mizan Zainal Abidin Mosque, or the Iron Mosque, after Friday prayers. He said: “Praise be to God, we joined Friday prayers with Dr Zakir Naik at the Sultan Zainal Abidin mosque in Malaysia.”
While this Facebook posting provides some credible evidence of Naik’s presence in Malaysia, there are unverified reports that claim that the Malaysian authorities have placed him in a safe house with round the clock security either in Cyberjaya or Putrajaya.
Despite these bits of information about the whereabouts of Naik trickling in, Deputy Home Minister Nur Jazlan has denied that the preacher is in Malaysia. He even denied a Times of India report that Malaysia was harbouring him.
If it is proven beyond reasonable doubt that Malaysia is indeed harbouring Naik, then such an act does not augur well for the diplomatic relations between India and Malaysia.
Even if there is no extradition treaty between both countries, it only makes sense for Malaysia to hand over those suspected of committing crimes in India to the Indian authorities. I am sure India would be expected to reciprocate, if found that those suspected of having committed criminal activities in Malaysia, were found hiding in India.
Apart from being known as a controversial Islamic preacher, Naik is wanted by India for suspected terrorist-related activities and links with the underworld.


The Indian authorities have allegedly found that Naik’s preaching had something to do with the terrorist attacks in a cafe in Dhaka, Bangladesh some time back. The Indian authorities also have evidence that Naik was responsible for instigating some youths in Kerala to take part in Islamic State-related (IS) activities.
The most damning thing about Naik is his alleged long-established links with Mumbai’s underworld. It surfaced recently that Iqbal Kaskar, the brother of Dawood Ibrahim, also one of India’s most wanted criminals, had links with Naik.
In fact, Iqbal Kaskar was the chief financial officer responsible for raising funds from underworld activities to finance Naik’s Islamic Research Foundation (IRF). This was revealed by Iqbal to India’s Enforcement Directorate (ED) recently.
The Malaysian authorities might have a “soft” spot for Muslim intellectuals and preachers. This is fine. But surely they cannot be silent over a person suspected of bringing death and destruction onto innocent people by engaging in the worst forms of preaching, leading to terrorist activities.
Just because Malaysia has a good relationship with Turkey does not mean that it has to function on the behest of the government there. Recently, Turkish intellectuals and those opposed to the authoritarian policies of the Erdogan regime were deported without proper investigation.
At the same time, Naik is given a red-carpet welcome, given the status of permanent resident and, if I am not mistaken, might even have acquired his citizenship by now.
The Malaysian government must come clean on the matter of Naik. It cannot keep denying that he is not here. Events are slowly, but surely, unfolding that even Saudi Arabia is not willing to provide sanctuary to Naik given the overwhelming evidence against him for inciting terrorist activities.
While Malaysia has taken a tough stand in terms of arresting those sympathetic to and supporting the efforts of the IS, it continues to harbour suspected criminals who come in the guise of religious scholars and preachers.
P Ramasamy is Penang deputy chief minister II.
The views expressed are those of the author and do not necessarily reflect those of FMT.