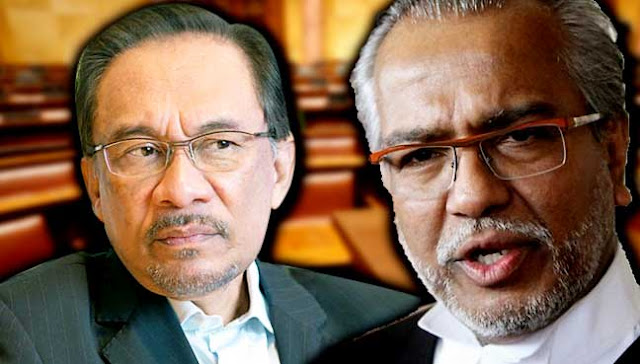 KUALA LUMPUR: The High Court will rule on Oct 24 whether the government is successful in striking out Anwar Ibrahim’s suit to compel Prime Minister Najib Razak to disclose his bank accounts, following allegations that RM9.5 million was transferred to lawyer Muhammad Shafee Abdullah’s account.
The government’s legal team was led by Awang Armadajaya Awang Mahmud while Anwar’s team was led by Gopal Sri Ram. They took about 30 minutes each to submit before justice Azizah Nawawi.
Hearing was held in chambers as an application by Sri Ram to make the proceedings public under Section 15 of the Courts of Judicature Act was turned down without a response from government lawyers.
Another application to produce Anwar, who is in Sungai Buloh prison, to follow the case was also refused.
FMT understands lawyers for Anwar submitted that the Court of Appeal decision in March 2014 to convict the former opposition leader for sodomy was obtained in an unconstitutional manner.

The government had given a temporary licence to Shafee to be made ad-hoc prosecutor to conduct the appeal that led the court to set aside Anwar’s acquittal by the High Court in 2012.
The Federal Court, in February 2015, affirmed the conviction and five year jail term against Anwar for sexual misconduct on former PKR aide Mohd Saiful Bukhari Azlan in 2008.
Counsel for Anwar argued that their client was denied a fair trial under Article 5 (1) of the Federal Constitution.
Azizah was told that justice was the product of a fair trial and a just decision.
It was also submitted that a fair trial meant that the right to prosecute must be done by an independent person, not by someone who had a personal interest.
In this case, the judge was told that there was an unrebutted allegation that the prosecution was paid RM9.5 million in two tranches by Najib, a material witness in Anwar’s sodomy case.
They said Shafee, as prosecutor, had a financial interest and was not a fair prosecutor.
Azizah was told information about the payments was suppressed from the Federal Court when an application was made to disqualify Shafee.
The lawyers said Shafee owed the Federal Court a duty of utmost good faith and it was incumbent upon him to make the disclosure then.
The government’s legal team urged Azizah to allow their application as Anwar’s suit was all about setting aside the criminal conviction.
They said Anwar had filed another suit to set aside the sodomy conviction but on grounds that the Court of Appeal and Federal Court judgments were obtained by fraud.
They said this was a plain and obvious case to strike out the suit.
On June 9, Anwar filed a suit to quash his sodomy conviction on grounds the court did not come to a just decision as Shafee, then appointed as ad-hoc prosecutor, had allegedly received the money from Najib.
Later, Anwar made a discovery application to direct Najib and Shafee to disclose their bank accounts, following allegations that RM9.5 million had been transferred to the lawyer’s account.
Shafee held a watching brief on his behalf while Nor Emelia Mohd Iszeham represented Najib.-FMT NEWS-