ECRL cost expected to surge up to RM70b, says report 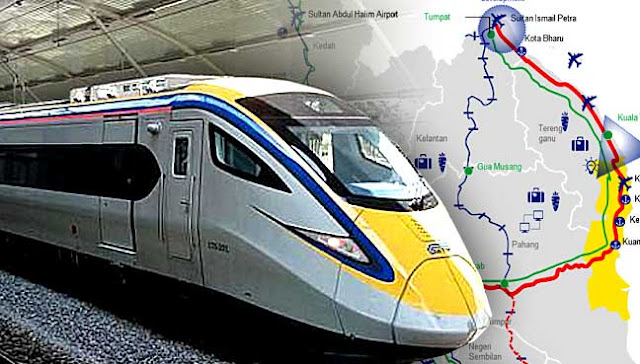 PETALING JAYA: Malaysia’s East Coast Rail Line (ECRL) project, undertaken with financial support and engineering expertise from China, is likely to see its total cost swelling up to RM70 billion, a report said.
The project, stretching over some 688 km from Gombak in Selangor to Tumpat in Kelantan, was officially cited to cost RM55 billion.
The Edge reported sources as saying that the rise in cost would be due to certain requisite factors, such as land acquisition expenses, not having been taken into account yet.


It said more details were expected to be released to the public by the end of the year.
According to the report, the executive summary of the project’s environmental impact assessment (EIA) stated that the acquisition would entail 6,301.99 hectares, of which 46% or 3,390 hectares were privately owned and sited on 8,699 lots.
The summary also described the system as “an electrified single track railway line built on a double track formation”, it said.
It said this implied that current plans only accounted for a single-track line despite the railway base being designed for double-tracking.
During the groundbreaking ceremony for the ECRL on August 9, Prime Minister Najib Razak described the project as a “game changer” and “mindset changer” for Malaysia as it would significantly cut travel time to and from the east coast of the peninsula.
He said the full trip was expected to take less than four hours, compared to the current eight- to 12-hour land journey during normal periods between the two places.
“The ECRL project also sets the tone for an economic spin-off effect, and positive social impact for the east coast states,” he had said.
The railway will be built by China Communications Construction Company Ltd (CCCC) with Malaysia Rail Link Sdn Bhd (MRL) tasked as the project owner.
Malaysia also received “attractive” financing terms, with China Exim Bank financing 85% of the project, including a soft loan of 3.25% and a moratorium period of seven years, Najib had said.
The remaining 15% would be funded through a sukuk programme managed by local investment banks.
-FMT NEWS-