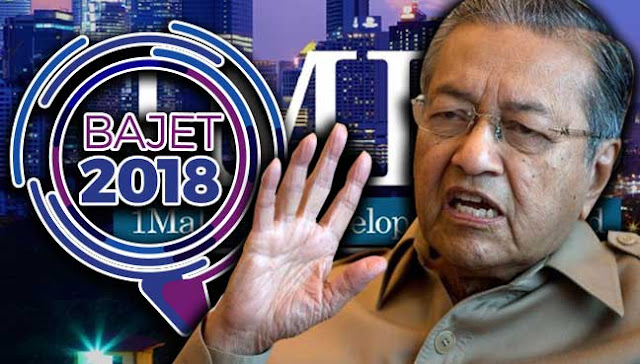 PETALING JAYA: Former prime minister Dr Mahathir Mohamad says the goodies presented in Budget 2018 is Prime Minister Najib Razak’s way of hoping the people will forget about the controversies surrounding 1MDB.
“This is Najib’s way. He believes cash is king and that he can close the eyes of the people and stop their thinking by giving them money,” Mahathir said in a video message uploaded by Parti Pribumi Bersatu Malaysia (PPBM).


Mahathir, who is also Pakatan Harapan and PPBM chairman, said it remained to be seen if Najib’s promises would be a reality.
“It is his hope that people will focus on the sweets given and forget about the 1MDB scandal.
“But this hope will not become a reality as the people cannot forget the 1MDB scandal and other scandals associated with Najib,” Mahathir said.
He also said with a general election looming, it was natural to have allocations in the budget that would sway the people to re-elect the government. All the same, he said, the allocations in Budget 2018 were excessive.
“Almost all the allocations were aimed at being popular. Everyone is given allocations that has never been given before in previous budgets.
“This is solely aimed at getting support for the election,” he said.
“The presented budget is unusual, in that it provides excessive allocations which the country may not have the money to pay for,” he said, adding that he doubted Putrajaya would be able to deliver on the promises made.
Claiming that the government wouldn’t be able to afford some of the allocations, he said, “Where the money is coming from has not been ascertained.”
Mahathir also said that the aim of the PH alternative budget was to gauge the public’s feedback on what they wanted.
“We have received a lot of feedback and I am sure PH will take it into consideration because it is what the people want, not what the party wants,” he said.
In tabling Budget 2018 in the Dewan Rakyat on Friday, Najib announced that the federal government was expected to collect RM239.86 billion in revenue next year, and proposed a total allocation of RM280.25 billion, an increase of over RM20 billion from this year.
He also said a sum of RM234.25 billion would be allocated for operating expenditure and RM46 billion for development expenditure.