China’s envoy bids farewell to ‘my most beloved Malaysia’ 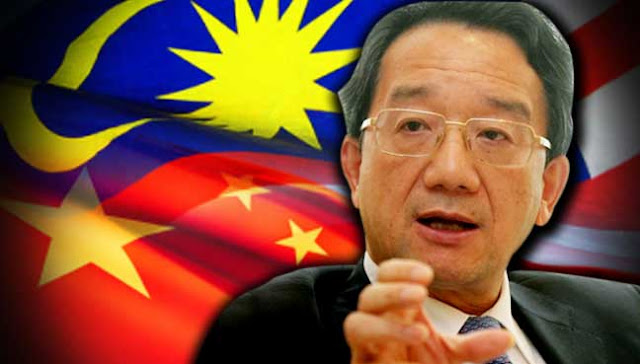 KUALA LUMPUR: Dr Huang Huikang, who bids farewell to Malaysia tomorrow after four years as China’s Ambassador, is certainly the most high-profile foreign diplomat to be based here that Malaysians have seen and known.
His exposure in the local media is something that other diplomats could only envy but it’s quite natural given the phenomenal boosts in bilateral ties between the two nations in the 1,390 days to be exact, that he was China’s main man here.
It also coincides with what he calls the Diamond 40 years’ anniversary of diplomatic ties initiated by Malaysia’s second Prime Minister Abdul Razak Hussein and the legacy placed on an even stronger keel by his son Najib Razak since he became prime minister in 2009.


“The bilateral relations now have entered into the best period of history and have always been in the forefront among China’s relations with Asean countries,” Huang said at a farewell dinner he hosted here on Friday.
China’s foreign direct investments in Malaysia have resulted in such ventures like the China-Malaysia Qinzhou Industrial Park and a similar park in Kuantan, the Melaka Gateway, the East Coast Rail Link ,the Geely-Proton cooperation, the Digital Free Trade Zone and other flagship projects.
China has been Malaysia’s largest trading partner for eight consecutive years with bilateral trade volume reaching US$100 billion.
It has also become the largest source of foreign investment in manufacturing, the main construction contractor and one of the largest sources of foreign tourists to Malaysia.
Huang spoke of the arrival of China’s iconic giant pair of pandas, now a major draw for visitors to Zoo Negara, and the joint effort by both countries in facing the Malaysia Airlines flight MH370 tragedy whose wreckage has still not been found in the three and a half years it has gone missing while on a flight from Kuala Lumpur to Beijing. Most of the 239 people on board were Chinese nationals.
“I am lucky to witness a great leap forward of China-Malaysia relations in the past four years.I have travelled through all the 13 states of Malaysia and met many friends from all walks of life, feeling the strong will among the people to strengthen cooperation between China and Malaysia,” he said.
Huang has had many accolades coming his way for standing out among the long list of foreign diplomats here, including recognition as Best Chinese Ambassador to Malaysia, Best Friend of Malaysia, Best Friend of the Chinese Community and Best Friend of Chinese Education.
And during the farewell dinner, another titled was bestowed on him, the Brand Laureate Diplomat Award presented by its president Dr KK Johan.
“As a veteran of diplomacy, I have left my footprints almost everywhere in the world, but besides my motherland China, Malaysia is the most beloved one,” he said in a voice choked with emotion having to leave Malaysian shores with a heavy heart.
His parting shot: “I will always remember my experience in Malaysia. Wherever I will be, I will be your friend forever and I will continue to do whatever I can to consolidate the China-Malaysia relations”.