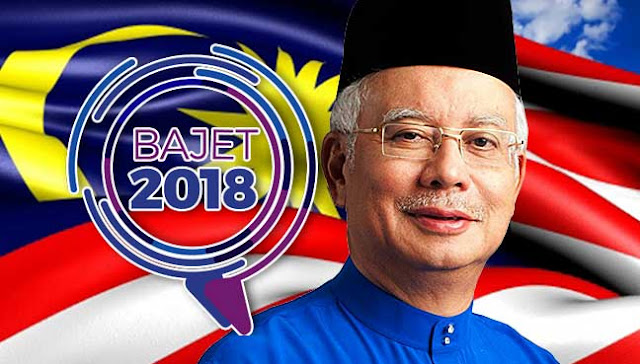 KUALA LUMPUR: Prime Minister Najib Razak has tabled the RM280 billion Budget for 2018, his last before the next general election which must be called by middle of next year.
Below are the highlights:
Civil Servants
• 1.6 million civil servants to receive the following benefits:
– second round time-based promotions
– senior servants who retire due to health reasons will be accorded the same benefits as those who undergo mandatory retirement
– special leave for teachers increased to 10 days a year, up from seven
– seven days unrecorded leave for umrah pilgrimage
– women at least five months pregnant allowed to leave work an hour earlier while husbands accorded the same privilege if their work locations are in close proximity to each other
– maternity leave increased from 300 to 360 days throughout service with a maximum of 90 days a year
– RM1,000 set for minimum pension amount
Senior Citizens, Disabled, Children
• RM1.7 billion for the following areas:
– RM603 million to increase allowance of senior citizens from RM50 to RM350
– RM100 million to increase allowance for the disabled by RM50 a month
Digital Free Trade Zone
• RM83.5 million allocated for DFTZ in Aeropolis, KLIA.
• Increase minimum value for imports from RM500 – RM800.
Sustainable Development
• RM5 billion allocated under Green Technology Funding Scheme.
• RM1.4 billion to reduce non-revenue water programme.
• RM1.3 billion to build Off-River Storage as an alternative water source.


• Special fund set up for children born between Jan 2018 to Jan 2022.
• Tax relief for employers who employ the disabled that include those involved in accidents and have critical illnesses.
• Local councils to make it mandatory for all new buildings to have childcare facilities, beginning in Kuala Lumpur.
Public Transport
• Government studying proposal for a new airport in Pulau Tioman.
• Government to build new airport for Mukah and expand airport for Kota Bahru and Sandakan.
• Government to upgrade Penang and Langkawi international airports.
• RM55 million transport subsidy for rural rail services from Tumpat to Gua Musang.
• RM45 million to create a biometric control system to monitor the movement of express bus services.
• RM95 million for the repair and construction of jetties as well as river mouth dredging.
• RM1 billion for public transport fund for start-up capital and procurement of assets like buses and taxis.
• RM3 billion for transport development fund for the purchase of maritime assets, aerospace technology development and rail.
Infrastructure
• Special border economic zone in Bukit Kayu Hitam to be developed.
• Pulau Pangkor to be declared a duty-free zone.
• RM230 million to continue central spine road project from Raub to Bentong.
• RM5 billion for the west coast coastal highway from Banting to Taiping.
• Government to expedite MRT3 project by two years from 2027 to 2025.
• RM32 billion for MRT2 project (Sg Buloh-Serdang-Putrajaya).
• RM110 million to provide alternative road to Port Klang.
Tourism
• RM30 million to be allocated to the Malaysian Healthcare Travel Council to boost medical tourism.
• RM500 million for the promotion and development of tourism.
• RM1 billion to tourism infrastructure development fund.
• RM2 billion fund for SMEs in tourism.
Agriculture
• RM200 monthly for a duration of 3 months for padi farmers while waiting to harvest their crops, which amounts to RM150 million.
• RM200 million for rubber replanting, RM140 million for development, re-planting and promotion of oil palm.
• Almost RM500 million to improve agriculture infrastructure.
• RM2.3 billion in incentives and assistance for the agriculture community.
• RM6.5 billion allocated to the smallholders, farming and fishing communities.
Other Highlights
• RM100 million with a 70% government-guaranteed loan for the furniture export industry.
• RM200 million allocated for training programmes, grants and SME easy loans under SME Corp; and close to RM82 million for halal products and industry development.
• RM2 billion set aside for 70% government-guaranteed loans.
• RM5 billion allocated for start-up capital for businesses.
• RM7 billion allocated to Skim Jaminan Pembiayaan Perniagaan.
• SMEs expected to contribute 41% of GDP by 2020.
• Private sector investment is expected to reach RM260 billion by 2018 and will be the engine of growth.
• Total investments in the country is expected to increase by 6.7% contributing to 25.5% to the GDP for 2018.
• RM26.34 billion for economic sector; RM11.72 billion for the social sector; RM5.22 billion for the security sector; RM2.72 billion for general administration sector.
• Administration budget is RM119.82 billion; other expenditure is RM1.08 billion; asset procurement is RM577 million.
• For 2018, federal government is expected to collect RM239.86 billion in revenue.
• Allocation for Budget 2018 is RM280.25 billion, an increase of over RM20 billion.
• B40 household income has increased to RM3,000 per month from RM2,629 for the period 2014-2016.
• Monthly median income has increased from RM4,585 in 2014 to RM5,288 in 2016.
• Current per capita income stands at RM40,713, expected to reach RM42,777 by 2018.
• Our international reserves now stand at US$101.4 billion.
• In August, exports hit a high of RM80 billion, recording double-digit growth.
• 69% or 2.26 million new jobs created so far from the target 3.3 million to be created by 2020.
• 3  international credit rating agencies have reaffirmed our A-rating with stable prospects.
• Looking at 2009, our fiscal deficit was at 6.7% of the GDP and is expected to decrease to 3% in 2017 and 2.8% in 2018.
• Actual private investment for 2016 is over RM211 billion.
• Government projection growth of between 5.2% to 5.7% for 2017, higher than the projection in March of between 4.3% and 4.8%.
• Projected GDP increase from 4.9% to 5.2% for 2017.
• The country has had a growth rate of 5.7% in the first half of 2017.
-FMT NEWS-