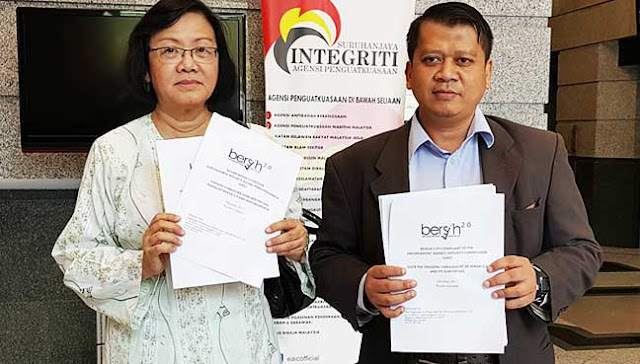 PUTRAJAYA: Bersih 2.0 has taken its complaint of police harassment to the Enforcement Agency Integrity Commission (EAIC) after claiming no action by a minister and Suhakam.
Bersih 2.0 chairperson Maria Chin Abdullah alleged today the police made a total 122 investigations or arrests of the electoral watchdog’s members and supporters since last year.

Maria said the NGO had earlier lodged complaints to Suhakam (Malaysian Human Rights Commission) and Minister in the Prime Minister’s Department Paul Low Seng Kuan but no action was taken.
“So now we have come to EAIC,” she told reporters after submitting the complaint to EAIC director of operation division Muhammad Bukhari Abdul Hamid at the EAIC headquarters.
She listed 63 investigations or arrests from Oct 1 till Nov 18, 2016 over the Bersih 5 convoy and 36 on Nov 19, 2016 over the Bersih 5 rally.
There were 14 investigations or arrests related to Maria’s detention under Section 124C of the Penal Code and nine investigations or arrests over the Bebas Maria (Free Maria) vigils.
In May this year, three Bersih steering committee members — Mandeep Singh, Zoe Randhawa and Chan Tsu Chong — were questioned at the Dang Wangi district police headquarters in Kuala Lumpur.
They were alleged not to have given the required 10-day notice under the Peaceful Assembly Act before holding the Bebas Maria candlelight vigil gathering at Dataran Merdeka from Nov 21 to 28 last year.
On Aug 16 this year, women’s rights activist Ivy Josiah and All Women’s Action Society (Awam) former president Ho Yock Lin were also questioned by police in connection with the Bebas Maria walk which took place last year.
Maria said she also wanted EAIC to investigate the death threats against her, her three sons, human rights activist Ambiga Sreenevasan and Bersih committee member Mandeep Singh.
She said she wanted answers from the police to account for their actions against all these people.
Maria pointed out that the electoral watchdog’s agenda was simply to ensure clean and fair elections.
“What is so wrong with the agenda, that gangsters are used to beat and harass us till we can’t conduct our activities?” she asked.
-FMTNEWS-