Zahid: Govt will not allow gay party in M’sia to proceed 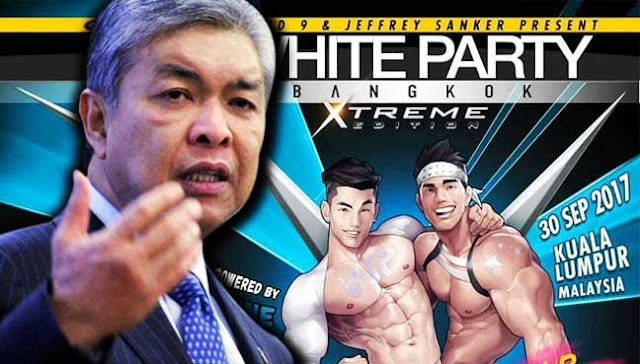 MANILA: The Malaysian government will not allow the gay event or party planned for Sept 30 in Kuala Lumpur to proceed, says Malaysian Deputy Prime Minister Ahmad Zahid Hamidi.
He said the organiser had yet to apply for a permit for the event or party but he had instructed the police not to approve the gathering.

“If such a party or event is held, then it is an illegal gathering,” he told Malaysian journalists here.
Zahid, who is also the home minister, arrived in the Philippines on Tuesday to attend the 11th Asean Ministerial Meeting on Transnational Crime (AMMTC) and Related Meetings, which concluded on Thursday.
A news portal report two days ago stated that a gay event would be held in Kuala Lumpur on Sept 30 to promote “White Party Bangkok”, the biggest annual gay music festival in Asia, scheduled for Dec 28 in Thailand.
Zahid said he had received a report from Bukit Aman on the planned event and he had instructed the police to act accordingly.
He said he had also instructed the Immigration Department to deny visas or permission of entry to any foreign national intending to attend the event.
“We are monitoring the names of the relevant individuals and will place them on the ‘not to let’ category,” he said.
Zahid said the government was most concerned about the police report and the concerns of NGOs and political bodies about the intention to hold the event here.
“As the home minister, I have instructed the police and Immigration Department to ensure that the White Party is not held in our country, anywhere at all – indoors or outdoors.
“This is my commitment that I wish to state to all Malaysians,” he said.