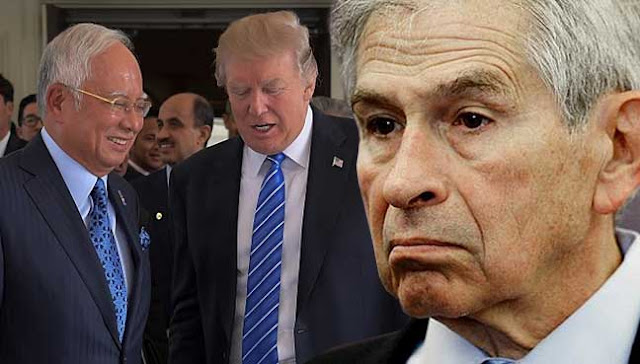 KUALA LUMPUR: Malaysia is known to pay money to enable meetings with US presidents, a Washington insider says in reference to the recent meeting between Prime Minister Najib Razak and US President Donald Trump.
Paul Wolfowitz, a friend of jailed opposition leader Anwar Ibrahim, and a visiting scholar at the American Enterprise Institute who served seven US administrations, suggested that the meeting was arranged by a former Trump aide.

In an opinion piece carried by Newsweek, Wolfowitz, who once served as US deputy secretary of defence, cites several instances of Malaysia or Malaysians paying for the attention of US presidents in the past.
He said: “In May, a former Trump campaign aide – Healy E Baumgardner-Nardone of the ‘45 Group’ – registered as a foreign agent to represent the Office of the Prime Minister of Malaysia. She reported receiving US$250,000 for her services.
“The Malaysian government has paid lavishly in the past for Washington ‘swamp dwellers’ to purchase influence and disparage its opponents and critics.”
During president Barack Obama’s second term, he says, Malaysians “rewarded a major Democratic Party fundraiser handsomely for representing them, just before Najib secured an Obama state visit to Malaysia (the first by a US president in 60 years), and then received an even more unprecedented invitation from Obama to join him in Hawaii for a game of golf.”
Wolfowitz noted that during George W Bush’s first term as president, “Malaysian business interests” hired Belle Haven Consultants for fees in excess of US$1 million over two years to promote Malaysian interests in the US.
“Some of that money was reportedly used to influence the views of a prominent conservative think tank, through the intermediary of the Alexander Strategy Group, associated with former House Majority Leader Tom DeLay and the notorious Jack Abramoff.”
During Obama’s first term, he says, the Najib government “paid millions to APCO Worldwide of Washington, a portion of which went to the London-based ‘Fact Based Communications, Ltd’ to hire an individual named Josh Trevino, to organise a network of bloggers to write blog posts disparaging opposition leader Anwar Ibrahim – whose coalition was growing in strength heading into the 2013 elections.

“That game blew up when Trevino was fired by The Guardian of London for failing to disclose that he was on the Malaysian payroll while writing a supposedly independent column. That forced Trevino to file a belated foreign agent registration exposing the whole scheme.”
Wolfowitz, who has also served as World Bank president, says the Malaysian government does not “merely disparage its critics”.
“Just last week, in the latest development in the 1MDB case, FBI special agent Robert Heuchling asserted in a filing in court in Los Angeles that ‘identifying witnesses [in the case] could result in intimidation or threaten their safety,’ citing ‘reports of local officials and politicians who have been arrested for purportedly disclosing information linked to 1MDB’.
“He also cited Malaysian press reports from Aug 30 that said ‘the driver of former Malaysian attorney-general Abdul Gani Patail was shot in public as a possible warning against assisting the US government in the case’.”
Wolfowitz clearly does not approve of Trump’s meeting with Najib, quoting what several people or newspapers had said about the meeting, including the remarks of an Australian expert on Southeast Asia.
He notes that the New York Times had quoted Donald Greenlees of the Australian National University as saying, before the meeting: “From a pure public relations point of view, it’s a meeting the White House should avoid. Even a photo op with Kim Jong-Un would be better.”
The suit seeks to recover and forfeit over US$1 billion in assets alleged to have been purchased with funds allegedly misappropriated from 1Malaysia Development Bhd.
Najib has consistently denied any wrong doing.
He says Trump should have given a diplomatic excuse not to meet Najib, as doing so would have sent a strong signal to other lobbyists attempting to “sell access” to the US president.
Wolfowitz adds, having failed to do that, at a minimum Trump should find out who was responsible for inviting Najib to the White House. “And if they did not properly inform him of the scandal surrounding Najib, someone needs to be disciplined.”-FMTNEWS-