There is no ‘Noah’s Ark’, the federal government must act 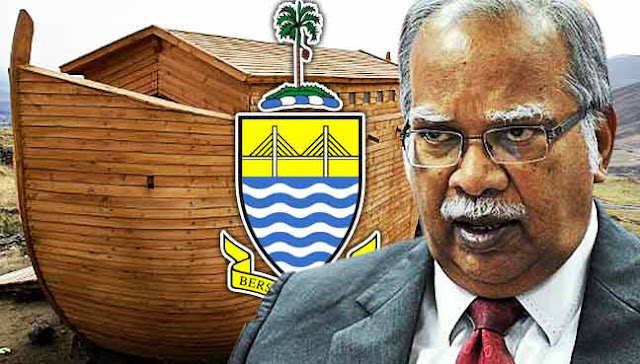 
The constitutional separation of powers makes it clear that the state cannot barge into areas that come under the jurisdiction of the federal government.
Furthermore, the budgets of state governments are too small to undertake massive and costly flood mitigation projects that only the federal government has the capacity to do.
Flood mitigation has become an important area of focus for both the federal and state governments due to climate change and to the frequency and intensity of rainfall.
On Sept 15, 2017, Penang was inundated by massive floods – as the quantity of rain that normally falls in one month fell in one day. Nobody could have anticipated the kind of rainfall that Penang had been subjected to in the last few years. It is during heavy rainfall, resulting in massive flooding, that people not only in Penang but also in other states experience misery and nightmare.
While we can only generalise on the causes of climatic changes that result in massive floods and landslides, there are individuals and NGOs who are quick to blame the state government, particularly in Penang, for allowing development in hilly areas, assuming this to be the primary cause of the floods.
However, these civil society organisations, in their zealous pursuit to cast the blame on the state government of Penang, are silent about the nature of development taking place in hilly areas, especially the unchecked and unregulated agricultural activities. A recent study points out that unregulated agricultural farming might have something to do with floods as well as landslides.
Yes, I agree that given the erratic nature of weather conditions in the country, local governments, and state and federal authorities must apply strict regulations to prevent the worse effects of flooding. Perhaps the time has arrived for checking the illegal activities of farmers who have been somewhat left alone to pursue their agricultural activities, free from being regulated by laws and regulations. A few years back, floods, resulting in major landslides in Cameron Highlands, were found to have occurred not due to housing projects but due to unchecked and unregulated farming.
It is nice to hear that the federal government had allocated nearly RM2 billion for flood mitigation projects in Penang. It was on the basis of this information that the federal government said it couldn’t be faulted by the state government for preventing floods. But then, the actual truth is something else.
Yes, such an amount was announced in 2006, but the question is how much was spent for flood mitigation projects in Penang? According to state sources, only RM443 million was spent on mitigation projects over the last 12 years or so. According to Penang Local Government Committee chairman Chow Kon Yeow, RM1.4 billion was allocated under the 9th Malaysia Plan but only RM306 million was spent on floods. Under the 10th Malaysian Plan, RM193 million was allocated but only RM125 million was spent and under the 11th Malaysian Plan, RM205 million was allocated but only RM12 million was spent on flood mitigation.
Even if half the amount that had been allocated had been spent, it could have meant a massive reduction in floods. So, what the federal government says and does, are two different things. Undeniably there is big gulf between rhetoric and action!
It is not in the interest of the state government to cast the blame on the federal authorities. However, if the federal government ministers and agents keep on repeating lies and half-truths, then state government officials are duty bound to explain the truth of the matter.
The Penang Federal Action Committee chairman Zainal Abidin Osman said if the federal government had not spent RM2.6 billion under the three Malaysian Plans on flood mitigation, the situation could have been worse in Penang. This is a blatant lie coming from a person in a responsible position. The actual fact is that the federal government had only spent 25% of the original allocation. So what is Zainal talking about? Another spin?


Finally, the federal government should cut out its political propaganda and address the flood situation in Penang immediately. Penangites do not have the luxury of time for God to dispatch “Noah’s Ark” to rescue flood victims.
P Ramasamy is Penang deputy chief minister and DAP deputy secretary-general.
The views expressed are those of the author and do not necessarily reflect those of FMT.
Share to: