The prime minister should sue Newsweek and CNN for slander 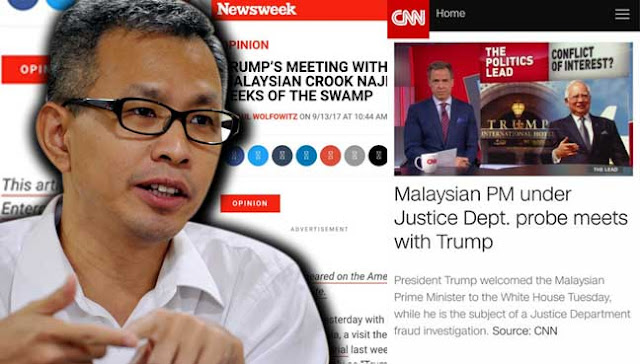 
There is absolutely no question that the reputation of Najib has been torn to shreds by the international media. The prime minister’s vain attempts at lifting his profile as an adored international leader invited to the White House by President Trump have not only failed to achieve his goals, but destroyed whatever semblance of credibility he might have had left.
Worse, he isn’t the sole or biggest victim. The ultimate victim is Malaysia and its citizens as we have nowhere to hide our faces as we have been shamed almost beyond redemption. We have lost our honour and pride when the leader of our country is described in this manner and when Malaysia earns the kleptocracy badge.
What “face” do we have left when our prime minister goes to the United States to help make America great again by offering their economy our crown jewels worth some RM60 billion, but all we get from the US media is mud thrown at our faces?
I call upon the prime minister to put together the best team of international lawyers to sue Newsweek and CNN for defamation and publication of “fake news” to redeem not only his reputation, but our honour and pride.
After all, Najib is well-known for going to the courts to protect his reputation. I have been at the receiving end of two such defamation suits – one in 2014 and one in 2017 with regards to 1MDB, both of which are still undergoing the legal process.
At the very least, the prime minister’s lawyer, Hafarizam Harun should inform both Newsweek and CNN that Najib is open to an apology. He offered me the same option just two days ago, claiming that the prime minister “is open-minded and would accept an ‘I am sorry Mr Prime Minister’” in order for a legal settlement to be reached.
However, if Najib doesn’t have the courage to salvage his reputation and credibility internationally by suing Newsweek and CNN, then he will not be able to convince the world that he is not guilty. In which case, there will be absolutely no reason for me to offer Najib any apology for pretty much saying the same things.
Tony Pua is MP for Petaling Jaya Utara and DAP National Publicity Secretary.
*The views expressed are those of the author and do not necessarily reflect those of FMT.