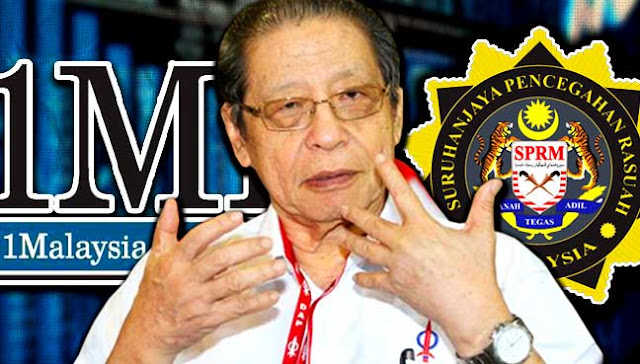 KUALA LUMPUR: Lim Kit Siang has reminded the Malaysian Anti-Corruption Commission that despite its aggressive stance against corruption, it has yet to act on the humongous 1MDB fiasco.
The anti-corruption body is not seeing the elephant in the room, even though it is going on a graft education campaign called the Kembara Jelajah Anti-Rasuah Konvoi 2017 with the slogan “Say No to Corruption”.
Noting that in many countries, anti-corruption commissions were being used by corrupt governments to punish opponents, the DAP parliamentary leader hoped the MACC would not allow itself to be similarly used.

Speaking at a DAP kopitiam dialogue in Pekan Nenas last night, the DAP veteran said the campaign slogan should be changed from “Say No to Corruption” to “Say No to 1MDB scandal”.
Lim gave five reasons for this: Firstly, the 1MDB scandal was the country’s largest financial scandal in history.
Secondly, Lim said, it had turned Malaysia overnight into a “global kleptocracy”.

Thirdly, the “Say No to 1MDB scandal” slogan would embrace “Say No to Corruption” but the “Say No to Corruption” slogan did not include “Say No to 1MDB scandal”, he said.
Fourthly, the MP for Gelang Patah said, there was no single issue which would as forcefully and powerfully send out the message to Malaysians and the world that the MACC was serious about fighting corruption than to launch an all-out battle against the 1MBD scandal.
“Fifthly, so long as MACC does not directly address the 1MDB scandal, it will never get the trust and confidence of Malaysians and the world that it has finally come of age and become a truly professional world-class anti-corruption agency dedicated to the war against corruption ‘without fear or favour’ of the powers-that-be.
Lim said the 1MDB scandal would be Malaysia’s “badge of shame” so long as the government and the various national institutions, including Parliament, the Judiciary, the Attorney-General’s Chambers, the police and the MACC “keep up the charade that while the 1MDB scandal continues to hog international headlines with new twists, turns and developments all over the world, there is no 1MDB scandal within the four walls of Malaysia”.
“Such a charade may succeed before globalisation and the information era, but it is just fool-hardy, myopic and downright foolish to keep up such pretences in the modern world.”
Lim said a new book on corruption and kleptocracy in the world detailed how nations had set up anti-corruption commissions as part of their lip-service commitment to fight corruption.
“This new book, The Corruption Cure by Robert Rotberg, pointed out that anti-corruption commissions are no panacea to end the problem of corruption. In fact, in many countries, anti-corruption commissions have been worse than ineffective as they have been ‘weaponised to punish opponents of corrupt regimes’.
“The Malaysian Anti-Corruption Commission must not be co-opted by the Executive to play such a role, and this is why it must be in the vanguard to  “Say No to 1MDB scandal” if it wants to convince Malaysians and the world that it is leading the anti-corruption battle of “Say No to Corruption” in Malaysia.”-FMT NEWS-