Shame on Jawi for targeting champion of Islam 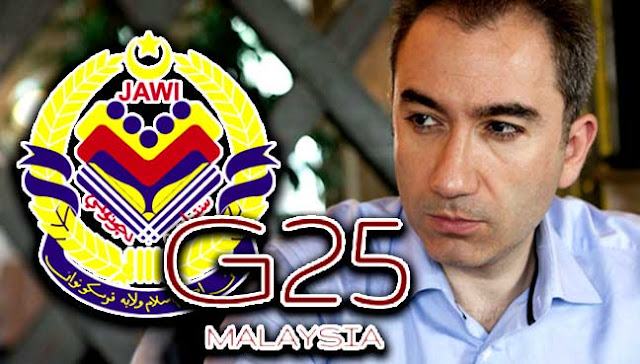 By G25
We, the members of G25, join our friends and colleagues in Suhakam and the Islamic Renaissance Front (IRF), as well as the lawyers and academicians, who have spoken out criticising the detention of Turkish author and journalist Mustafa Akyol at the KLIA on Sept 25, as he was about to leave the country after completing his speaking engagements in KL.
He was accused by Jabatan Agama Islam Wilayah Persekutuan (Jawi) of violating Section 11 of the 1997 Federal Territories Syariah Offences Act which requires that a person teaching Islam must get the prior approval of Jawi.

We consider the action by Jawi as heavy handed, extreme, and arbitrary.
Mustafa Akyol was in the country for the fifth time and had developed a special liking for Malaysia.
Although he was aware that Islam is highly-politicised in Malaysia, he felt it to be a model Muslim country which has done well in providing for the economic and social development of its people.
He was here, like on the previous four occasions, to conduct an academic discourse on Islam, and not, as accused by Jawi, to “teach “or “preach” Islam for which he would require a “tauliah”.
Mustafa is a Turkish national residing and teaching in the United States and has written several books and articles on Islam.
Teaching in prestigious universities, including Oxford, he is also a leading speaker at international conferences and is a regular columnist in major newspapers including the New York Times.
He often appears on international TV networks in well-known talk shows.
Akyol is one of the few Islamic scholars who has been effective in speaking in the West against Islamophobia.
In fact, he is a highly-respected figure in the West for his positive views on Islam.
He has always been a champion of Islam as a religion of peace, tolerance and moderation, and that democracy and Islam are compatible.
But the misguided and overzealous Jawi officials chose to arrest this well-known peaceful, moderate, and democratic advocate of Islam and kept him in detention for 17 hours without proper sleep, which is tantamount to gross mistreatment, if not torture.
This will leave him with a lasting impression on how a religious law in Malaysia can be used selectively by the religious authorities on any person that they pick on to show their power, and shows that the administration of Islam in the country is not based on justice but on the whims and fancies of the religious authorities.
We, in the G25 also fully support the statement by Suhakam which inter alia states: “Such extreme action in our multi-religious, multi-racial and moderate Malaysia in our view is repressive, undemocratic and intended to be intimidating.

There is no question that this must stopped by the government and such actions that reflect hostility, narrow mindedness and intolerance of civil, intellectual and religious discourse should not be committed again”.
We, in the G25, are particularly concerned that this action by Jawi is part of an increasing series of views and actions by Islamic authorities, groups, and individuals which are becoming more and more intolerant and disrespectful towards other Muslims and non-Muslims alike.
Arbitrary actions like these, in the name of religion, threaten the very foundation of the multi-racial and multi-religious character of Malaysia as a nation.
This incident further strengthens the belief, as a result of the perceived rise in extremism in this country, that Malaysia is fast losing its reputation as a moderate and democratic Islamic country.
Ironically, right now the Malaysian government is pushing its initiative on moderation at the United Nations General Assembly.
Many Malaysians are seriously concerned that the rise of extremism and intolerance by various groups is the result of a perceived ambivalent attitude, if not tacit countenance, by the government.
We, in the G25, therefore call on the government to take a clear and firm stance to urgently put a stop to the rise of religious extremism and intolerance, and to take definitive and urgent action to promote unity and harmony in this beloved nation of ours through moderation and renewed commitment to the Rukun Negara and the Federal Constitution, beginning in schools, colleges and universities, and with local communities.
G25, otherwise known as Group of 25, comprises prominent Malays who have served as senior civil servants and diplomats.
The views expressed are those of the authors and do not necessarily reflect those of FMT.