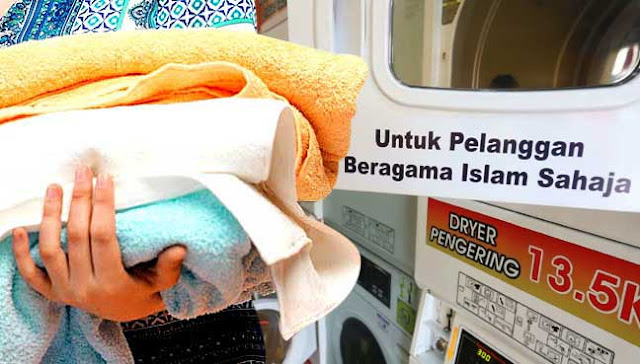 PETALING JAYA: The owner of Empire Laundry Hub in Kangar has covered a sign informing the public that only Muslim customers were welcome at his laundrette after he was reprimanded by the Perlis government and advised against the policy by state mufti Mohd Asri Zainul Abidin, who visited the premises.
Shalihuddin Naharuddin, 36, however, said he was still undecided as to whether he would allow non-Muslims to use the service and needed time to reconsider the matter.
He claimed he only wanted to uphold the concept of an “Islamic community”, and did not intend to discriminate against those of other religions or races.


On Wednesday, the Sultan of Johor, Sultan Ibrahim Sultan Iskandar, told the owner of a laundrette in Muar, who displayed a similar notice, to operate his business in Afghanistan if he wanted to continue with his “Muslims only” business policy.
“I cannot accept this nonsense… this is not a Taliban state and as the Head of Islam in Johor, I find this action to be totally unacceptable as this is extremist in nature,” the ruler was quoted as saying.
Shalihuddin today said the idea came about after a small survey he conducted among a group of Muslims, revealed that the majority wanted Muslim-friendly services.
He said the policy was mainly a marketing proposition as no other laundrettes in the surrounding area offered such a service.
“Even so, it is not that we do not allow non-Muslims to come here. They can still come if they want to have a rest at our laundrette,” he told FMT today, explaining that the premises had space for people to sit while waiting for their clothes to be washed.
“If non-Muslims come to do their laundry here, we will divert them to other laundrettes located about 400 metres away,” he said.
He said he covered up the notice after the state government instructed him to, and after the state mufti advised him against practising such a policy, following reports about the matter yesterday.
Meanwhile, the owner of the laundrette in Muar apologised on Wednesday after he was admonished by the Sultan of Johor, and agreed to offer his service to all races.
A photograph of the signboard he placed at the entrance of the laundrette clearly stating that the business was “Only for Muslims” went viral on social media earlier this week. The sign was reported to have been changed to “Muslim Friendly” after an intense debate among social media users.
In an interview with The Star, Sultan Ibrahim warned other business owners who implemented such discriminatory practices, that they could lose their licences as he intended to impose the ruling through the state executive council.
“Don’t mess around with your narrow-minded religious prejudices,” Sultan Ibrahim was quoted as saying. He also ordered state religious authorities to investigate the shop.
“Islam teaches the faithful to be tolerant and respect other people and faiths,” Sultan Ibrahim said.
-FMT NEWS-