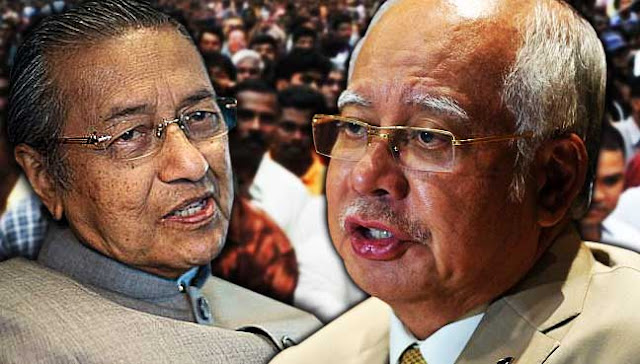 KUALA LUMPUR: Prime Minister Najib Razak today took an apparent jab at Dr Mahathir Mohamad’s record on the progress of Indians, telling MIC members that he had done more for the community compared with a certain leader whose ancestors are from Kerala.
“Even though my father and grandfather are not from Kerala, I am being described as the father of development for the Indian community,” Najib said at the MIC annual general meeting attended by about 5,000 members at PWTC.
He said he had undertaken a special effort to help Indians in Malaysia even when he was deputy prime minister under his predecessor, Abdullah Ahmad Badawi, when he worked on a cabinet committee to uplift the community.
He said this in drawing an apparent comparison between his administration and that of Mahathir, who was prime minister from 1981 to 2003.
Also present were MIC president Dr S Subramaniam , Barisan Nasional (BN) secretary-general Tengku Adnan Tengku Mansor and former MIC president S Samy Vellu.
Mahathir’s paternal ancestry is known to be from the state of Kerala in India.
Deputy Prime Minister Ahmad Zahid Hamidi had also touched on Mahathir’s Indian lineage in July when he said he had received a photo of Mahathir’s original identity card that allegedly stated his name to be “Mahathir a/l Iskandar Kutty”.
The “a/l” which stands for “anak lelaki” (“son of”) is generally used in Indian names in official Malaysian identity documents.
According to Zahid, who is also acting Umno deputy president, the document showed that “the man who struggled for the Malay agenda” was actually “using the Malays”.

Mahathir, who is now chairman of Pakatan Harapan and PPBM, had acknowledged his south Indian heritage in his 2011 autobiography “A Doctor in the House: The Memoirs of Tun Dr Mahathir Mohamad”, although he maintained that he was Malay and proud of it.
In an interview with FMT in late August, the 92 year old had acknowledged complaints that the Indians were poorly served during his 22 years in power, but he said he had allocated plenty of resources for them through MIC.
“Somewhere along the line, the allocations went elsewhere,” he said, adding that the situation would be better dealt with if PH was given the chance to rule the country.


This was not the first time Najib had taken a swipe at Mahathir over the latter’s lineage.
In July, he was reported to have said he was informed that he had done more for Indians than previous prime ministers, including “one who is of Indian descent”.
He said the launch of the Malaysian Indian Blueprint in April would help develop the community in their educational, social and economic challenges.
“Now, have you seen the opposition do anything for the Indian community? No,” he had said.
He had also warned that Malaysia could not risk being run by a coalition, referring to Pakatan Harapan, which did not have any concrete and proven economic, social and educational policy like BN.