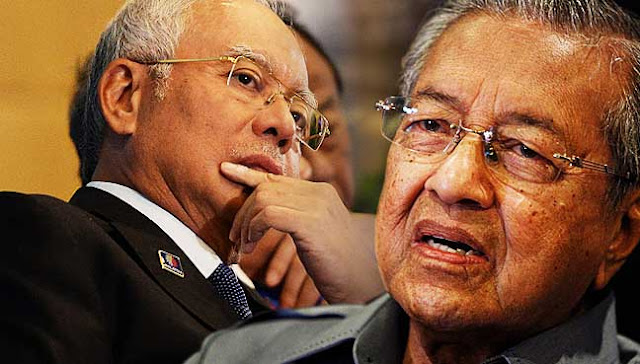 PUTRAJAYA: Dr Mahathir Mohamad today confirmed that Najib Razak was among the ministers in a 1993 cabinet meeting who rejected a proposal by then opposition leader Lim Kit Siang to set up a Royal Commission of Inquiry (RCI) into Bank Negara Malaysia’s (BNM) foreign exchange (forex) trading losses.
“Yes, the cabinet members included Najib, who supported the decision not to hold an RCI,” Mahathir said in response to a question by Anwar Ibrahim’s lawyer, Gurdial Singh Nijar.


The forex losses in question occurred in the 1990s, when Mahathir was prime minister.
Mahathir was the 24th witness to appear before the RCI to investigate the losses, said to be to the tune of nearly RM30 billion.
Gurdial asked Mahathir whether Lim had asked then finance minister Anwar in the Dewan Rakyat to refer to the cabinet to set up an RCI on the matter.
Replying in the affirmative, the 92-year-old statesman said Lim’s request had been discussed in the cabinet.
Speaking to reporters later, Mahathir repeated his call for Najib, who is now prime minister, to appear before the RCI to testify why his administration now supported the move to investigate the matter which took place some 25 years ago.
“In the cabinet meeting then, he was smiling away when the call to hold an RCI was rejected,” he said.

Najib, who was defence minister in 1993, was in Mahathir’s cabinet from 1986 to 2003.
Abdullah Ahmad Badawi replaced Mahathir as prime minister while Najib succeeded Abdullah in 2009.
During the RCI proceedings, conducting officer Suhaimi Ibrahim asked Mahathir whether he had known of the actual forex losses, but was unable to get a firm answer.
Mahathir said he knew what he had been told by Anwar, finance ministry officials and the late Jaffar Hussein, who was the BNM governor then.
This resulted in lawyer Mohamed Haniff Khatri Abdulla, who represents Mahathir, standing up to object to Suhaimi’s line of questioning.
Mahathir said when he was prime minister, the foreign media was not friendly towards him and as such, he had not taken their reports seriously.
“I relied on my officials although the media was reporting about the forex losses,” he said, adding that it was not as bad as it looked now.
He said he only knew later of BNM’s forex trading losses.
“BNM did not brief me unless there was a theft of money,” he said.
He said Jaffar and assistant governor Mohamed Nor Yackop had resigned from their posts in 1994 as they took responsibility over the forex losses.
“It was much later that I came to know they were involved in currency trading, but Jaffar did not buy billions of British pounds to suppress the currency,” he added.
-FMT NEWS-