Najib: Malaysia not a supplicant to US 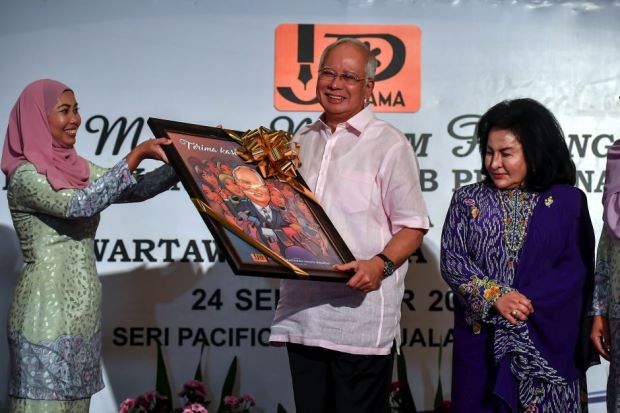 KUALA LUMPUR: Datuk Seri Najib Tun Razak has defended his recent visit to the White House, saying that Malaysia would not venture into any investment that does not benefit the country.
The Prime Minister said this following criticism by the Opposition over his statement to US President Donald Trump that Malaysia wanted to help strengthen the United States economy.

"When I said I wanted to strengthen the US economy, that doesn't mean that this is done without taking national interest into consideration.
"This idea is to show that Malaysia is not a supplicant, but that we come as a successful country that is recognised globally," he said at a hi-tea function with Women Journalists Association (Pertama) on Sunday.
On Sept 13 during his visit to the White House, Najib said the Employees Provident Fund (EPF) and Khazanah Nasional Bhd had planned to expand their investments in the US.
The EPF alone is expected to invest between US$3bil and US$4bil (RM12bil and RM16bil).
Explaining the purchase of Boeing aircraft, Najib said the move was necessary in making Malaysia Airlines the best international airline in the world.
"There were two options — Boeing or Airbus — and MAS has chosen to purchase eight Boeing planes, which are the Dreamliner," he said.
Najib said the Opposition should not turn it into an issue as Turkish Airlines had made a larger purchase compared to Malaysia.
"They bought 40 Dreamliner planes, but the Opposition chose to harp on our purchase.
"They shouldn't resort to myopic views when it is only our intention to place Malaysia on the international stage," he said.
He also said that the visit was historic as he was the first Malaysian Prime Minister to have received an invitation from the White House during the US President's first year in office.
-TheStarOnline-