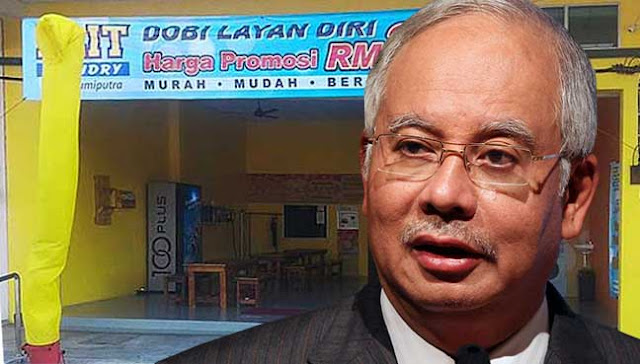 PUTRAJAYA: The apology of a laundrette operator in Muar, Johor, and the subsequent withdrawal of the policy to offer laundry services only to Muslims should be well-received, says Prime Minister Najib Razak.
Najib said the action was in line with the views of the Sultan of Johor, Sultan Ibrahim Sultan Iskandar.

He said there was basis in the Sultan of Johor’s concern that the laundrette operator’s Muslim-only business policy would lead to many having a narrow image of Islam, contrary to the country’s desire to nurture a united, harmonious, moderate and tolerant society.
“The government will remain committed in upholding true Islamic teachings while protecting the interests of other communities as required by Islam,” he said in a statement today.
Najib said as a country that upheld ‘wasatiyyah’ (moderation) and championed the goals of Maqasid Syariah, Malaysia would remain a moderate Islamic nation practising the moderate way of life as it had done since independence.
“I am confident that Muslims will continue to uphold this struggle because we all want to see Malaysia progress as a successful, respected and exemplary country,” he said.
A picture of the laundrette, with a sign saying it offered its services to Muslim customers only, has been circulating on social media for over a week.
However, the entrepreneur’s policy was criticised by Sultan Ibrahim, who said the laundrette operator should change the concept of his business or face action.
The entrepreneur apologised and reportedly removed the sign at the premises specifying that only Muslim customers were welcome at the launderette.-FMT NEWS-