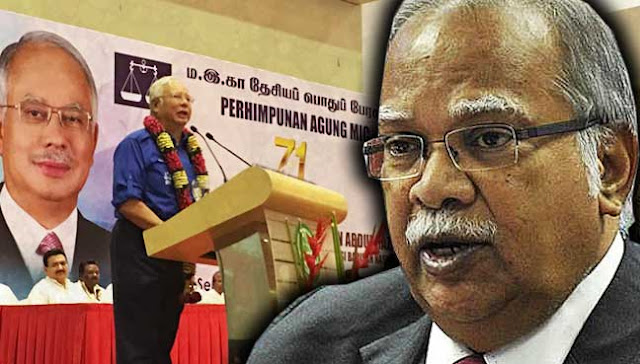 By P Ramasamy
It is ridiculous on the part of Prime Minister Najib Razak to have claimed that he is the father of the development of the Indian community at MIC’s annual general meeting on Sunday, Sept 24.
He also took credit for appointing an Indian as customs director-general despite strong objections from some sections of the Malay community.


Is Najib truly concerned about the Indian community, or does he merely want to endear himself to the community to ensure that they will make a difference in the coming general election in favour of the ruling regime?
Najib is well aware that the Indian community, despite its sacrifices, is one of the poorest sections of the Malaysian community. The vast majority of Indians face problems of unemployment, and difficulties obtaining business licenses and entering into tertiary institutions, not to speak of the religious and cultural squeeze they experience as result of the hegemonic role of Islam.
Najib cannot even settle the matter of unilateral conversion of non-Muslims, to the anger and frustration of the non-Malays, especially the Indians. While he says that Barisan Nasional (BN) lacks the two-thirds majority to amend the constitution, at the same time he gives a different message to the Muslims by saying that he will not give in to the demands of the non-Muslims without the support of PAS and Muslim organisations.
It is this cheap double-talk that has created serious doubts about the true intentions of Najib among the non-Malays. Yes, he might have given more money to the Indians in comparison to earlier prime ministers, but then nobody really knows whether the money has filtered down for the benefit of needy Indians.
Indians in the country demand to be respected as citizens and not discriminated against along the lines of race or religion. Financial assistance is important, but if they don’t have rights, such assistance might make little difference to their existence.
Indians, like other discriminated groups, require a political climate that in the long run would be conducive to the removal of many obstacles that stand in the way of them becoming full-fledged citizens where racial and religious bigotry is dismantled.
Is Najib, despite all his cheap talk, prepared to consider the fundamental structural problems that stand in the way of Indian development? Is Najib prepared to respect Indians not as “Indians” but as Malaysians who are entitled to equal and unalienable rights as citizens of the country?
To say that he is the father of the Indian community shows, among others, that he has little or no respect for MIC, a party that supposedly represents the community. The whole world knows that the party has abandoned the Indians over the last few decades. If the party exists at all, it is merely due to the lifeline thrown by Umno.
Najib’s claim that he is the father of Indian development is certainly a big slap in the face of MIC, particularly its president S Subramaniam, who other than “warming his chair” has not done anything worthwhile for the benefit of the community.
MIC, other than being a weak partner of Umno, is a broken and shattered party today. It cannot claim to be the sole representative of the Indians, for not only is the community fractured along party lines, the opposition parties have more Indian parliamentarians compared to MIC.
Lately, a series of events has backfired for Najib. He is extremely desperate to shore up political support. His recent visit to the United States and his promise of billions in investments from public funds has not gone down well with the Malaysian public.
Other than this, the calling of a special press conference to make an important announcement merely entailed the re-admission of Muhammed Muhammed Taib into Umno.
It is rumoured that the press meet was called to announce the collapse of the Selangor government, but somehow this event did not materialise.


Najib should have announced that he was the father of Indian development when he first took office. If he had done so and followed up with serious measures to address the plight of the Indian community, then Indians might have given him a chance. It is too late now.
I have serious doubts that Najib will be able to endear himself to the Indian community in the coming days or months.
P Ramasamy is Penang deputy chief minister and DAP deputy secretary-general.
The views expressed are those of the author and do not necessarily reflect those of FMT.
Share to: