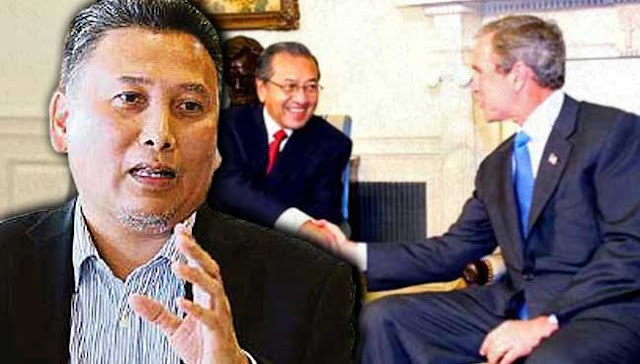 PETALING JAYA: The son of the late Megat Junid Megat Ayub has reportedly affirmed that the former minister had helped Dr Mahathir Mohamad seal an appointment with US president George W Bush at the White House by paying millions of ringgit in May 2002.
Megat Fairouz Junaidi said his father had helped arrange the meeting because he was deeply loyal to Mahathir, who was prime minister at the time.


“To my knowledge, it is true that Tan Sri Megat Junid was instructed to set up a meeting between Tun Dr Mahathir and President George W Bush. The initiative to set up the meeting had started in April 2001,” Megat Fairouz was quoted as saying by The Star.
“My father had met certain people, including paying the lobbyists, to ensure that the meeting materialised. The meeting eventually took place in May 2002,” he added.
Megat Junid was deputy home minister when Mahathir led the home ministry portfolio in the 1980s, and became the domestic trade and consumer affairs minister from 1997 to 1999. He passed away from cancer in 2008.
On Friday, Prime Minister Najib Razak accused Mahathir, who was PM of the country from 1981 to 2003, of being a hypocrite, claiming that he too had paid RM7 million through a lobbyist to set up a meeting with Bush.
He said this at the Kuala Lumpur International Airport upon his return from the US and UK where he had held meetings with president Donald Trump and prime minister Theresa May respectively.
“Dr Mahathir used the late Tan Sri Megat Junid as the main planner. Payment was made through the Batu Arang TNB (Tenaga Nasional Berhad) contract where millions had been paid as he wanted to meet Bush very much,” Najib said.
Mahathir, who is now chairman of PPBM and Pakatan Harapan, had earlier that day said Najib was mistaken if he thought his meeting with Trump on Sept 12 had won him brownie points with Malaysians back home.
The 92-year old claimed that feedback on the ground pointed to the public being “sore” over what transpired during the White House meeting between Najib and Trump.
He also alleged Najib was not given the treatment befitting a state leader during his US visit as no official reception or formal meal were held in his honour by the president’s office.
-FMT NEWS-