Mahathir challenges legality of Zulkefli as Court of Appeal president 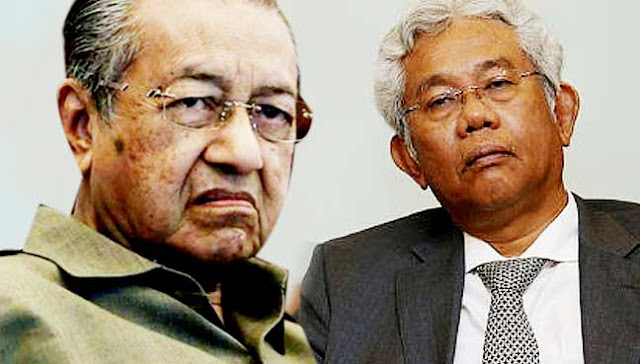 PETALING JAYA: Dr Mahathir Mohamad has filed another legal action to revoke Court of Appeal president Zulkefli Ahmad Makinuddin’s appointment and stop him from carrying out his judicial and administrative duties.
The former prime minister today filed a leave application for judicial review in the Kuala Lumpur High Court to compel Prime Minister Najib Razak to advise the king to revoke Zulkefli’s appointment as additional judge and Court of Appeal president.
Mahathir has named Najib, the government and Zulkefli as respondents.
In the application, Mahathir said Zulkefli should be barred from performing his judicial and administrative functions as the appointments were unconstitutional.
Lawyer Mohamed Haniff Khatri Abdulla said court papers would be served on the attorney-general’s chambers.
Zulkefli received his instrument of office from the king last Saturday and is expected to take his judicial oath as additional judge before Chief Justice Raus Sharif tomorrow morning.


On Aug 8, Mahathir also filed a similar action against Raus. The High Court has fixed Oct 24 to determine if leave should be given to hear the merits of the action.
Sabah-based lawyer Marcel Jude MS Joseph has also filed a similar application and the High Court in Kota Kinabalu will hear the matter on Oct 17.
In the action against Zulkefli, Mahathir, the longest-serving prime minister for 22 years from 1981, said Article 125 of the Federal Constitution did not allow the appointment of a Court of Appeal president beyond the retirement age of 66 years, plus six months an extension.
He said Article 122 (1A) did not allow an outgoing chief justice to advise the king to appoint a candidate who had yet to retire from the judiciary to be made an additional judge at a later date.
Mahathir also wants a declaration that the four top judicial administrators – the chief justice, Court of Appeal president, chief judge of Malaya and chief judge of Sabah and Sarawak – should not come from the ranks of additional judges.
Former chief justice Arifin Zakaria said he only proposed Raus and Zulkefli to be made additional judges.
However, the government announced on July 7 that Raus’s tenure was for three years from Aug 4 while Zulkefli will remain in his current administrative post for two years from Sept 28.
Raus was supposed to retire on Aug 3 while Zulkefli’s last day in office was today.
FMT understands the Malaysian Bar, the Advocates Association of Sarawak and Sabah Law Society also plan to file separate actions against Raus and Zulkefli after having obtained a mandate from their members.
Lawyers and at least two retired judges have argued that the constitution does not allow additional judges to double up as holders of administrative positions.
Retired chief justice Zaki Azmi, who argued that the appointments were valid, said the provision for additional judges was utilised as Raus and Zulkefli had only been in their positions since April 1.
Further, he said a constitutional provision that allowed judges to remain in office up to 66 years of age plus six months’ of extension was archaic compared with other Commonwealth countries.
Attorney-General Mohamed Apandi Ali also supported the appointments as it was in accordance with the constitution.