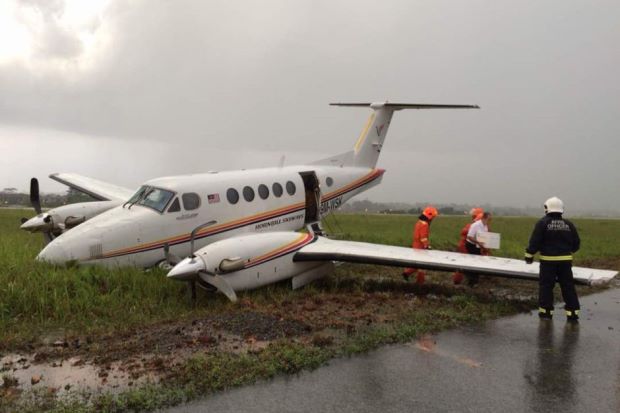 KUCHING: The runway of the Kuching International Airport (KIA) has been closed due to an incident involving a Beechcraft light plane after it was believed to have skidded upon landing at 6pm today.

Minister of Welfare, Community Wellbeing, Women, Family and Childhood Development Datuk Fatimah Abdullah was reportedly onboard the aircraft during the incident, along with six other passengers and crew members.

The plane was travelling from Mukah to Kuching.

Heavy rain and inclement weather conditions were observed during the time of the incident.

Air traffic landing and taking off from the airport has been delayed until 8pm, according to an editor attached to The Borneo Post scheduled to land at the airport this evening.

“We were on AirAsia flight AK5228 departing from Kuala Lumpur at 4.20pm, scheduled to reach Kuching by 6pm. By 5.45pm, the captain informed us that we will likely face delays due to bad weather, causing other planes to also circle around KIA,” he explained.

“About fifteen minutes later, the captain further updated that the airport was closed to 8pm and that all planes were now redirected to Sibu Airport until further notice.”

At press time, authorities at KIA have refused to comment on the situation, and Fatimah could not be reached for a statement.

According to the Fire and Rescue Department (Bomba), all aboard the aircraft are safe and accounted for.-theborneopost.com-
Share to: