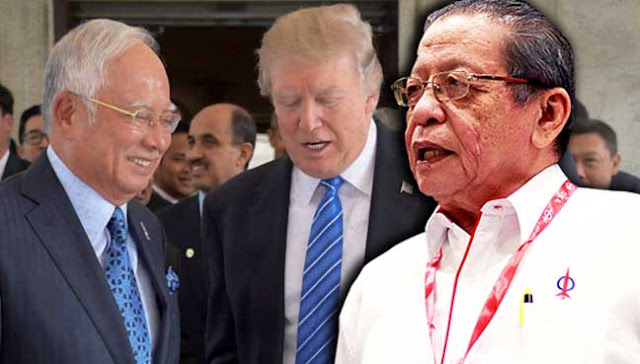 KUALA LUMPUR: DAP supremo Lim Kit Siang has poured scorn over Prime Minister Najib Razak’s recent “value propositions” to Donald Trump in assuring Malaysian investments to the US, saying it depicted Malaysia as bearing gifts like a vassal state to the White House.
The Gelang Patah MP questioned why Najib was given a “hero’s welcome home” at the Kuala Lumpur International Airport upon his return on Friday, claiming that the meeting with the US president in Washington on Sept 12 was to strengthen “someone else’s economy” instead of promoting Malaysia’s.

He said the propositions to invest billions in the US were “revolting and ridiculous” especially because the Malaysian economy was in dire straits and the people were suffering from rising costs and worsening standards of living.
“What was the ‘hero’s welcome home’ for?” Lim, who is the DAP parliamentary leader, said in a statement issued today following his speech at a DAP Malaysia Day gathering in Sandakan last night.
“What did Malaysia get in return for Najib’s three ‘value propositions’ to strengthen the US economy? Nothing for the country but a lot for Najib himself – which was in fact the very reason for his visit to the White House and meeting with Trump,” he added.
Najib had told Trump that the Employees Provident Fund (EPF) wanted to spend US$3- 4 billion on US infrastructure development.
“I want to say that we came here with a strong value proposition to put on the table. We want to help you strengthen the US economy,” he had said.
Najib also said Malaysia Airlines would buy 25 Boeing 737 jets and eight 787 Dreamliners, with another 25 737s slated for purchase in the near future. He said the deal would be worth more than US$10 billion (RM41.9 billion) in five years.
Lim said the propositions were ridiculous as the Malaysian economy was very small compared to that of the US.
“Malaysia’s GDP is less than US$300 billion while the GDP of USA is nearly US$19 trillion, some 63 times larger than the Malaysian economy,” he said.
He added that despite the White House meeting the issue of 1Malaysia Development Bhd (1MDB) will not gone away.
The US Department of Justice (DoJ) has undertaken legal action to seize assets allegedly purchased in the US with money linked to the sovereign wealth fund.
Lim said Najib’s real reason for making the trip was revealed when Umno’s Langkawi MP Nawawi Ahmad said at the welcome ceremony that the success of Najib’s visit was proof that he was not guilty of charges levelled by the DOJ in investigating the 1MDB issues.
“Nobody in his right mind would have expected Najib to be arrested when he visited the US to meet with Trump in the White House, but this is a very different proposition from whether he was involved in the international multi-billion dollar 1MDB money-laundering scandal,” Lim said.-FMT NEWS-