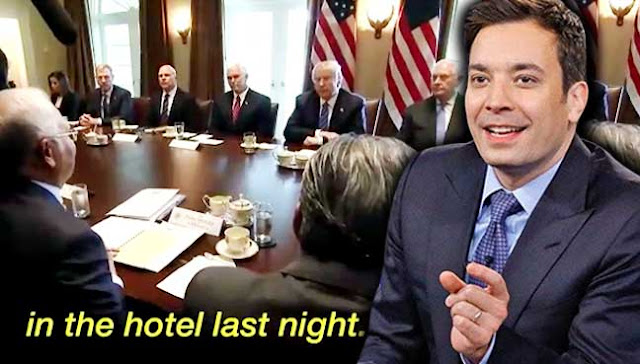 PETALING JAYA: Popular American comedian Jimmy Fallon has not spared Najib Razak of his hilarious jibes on the late-night talk show, The Tonight Show.
This time, Fallon played to his audience a comic re-make of an official White House video of the prime minister’s exchanges with President Donald Trump.


Fallon said Najib had spent the night at the Trump International Hotel, before showing a clip of the Malaysian delegation meeting with senior members of the US administration in the Cabinet Room of the White House last Tueday.
“Would you like to say something?” the clip begins with Trump’s original remarks.
“Yes I had a great time in the hotel last night,” says a voice-over mimicking Najib.
“I rented the movie Trolls. My favourite was the one with orange skin and fluffy hair. It reminded me of you.”
At this point, the clip shows Trump thanking Najib.
It then goes on with “Najib” saying: “By the way, the porn charge on the room was not mine. Ted Cruz came over.”
The audience burst into laughter, as Fallon and co-host Steve Higgins call for “an investigation” on who allowed Cruz into the hotel room.
Ted Cruz, a senator who was vying to become a Republican presidential candidate before losing out to Trump, was involved in a Twitter controversy recently when his official account shared a tweet featuring hardcore porn.
In the original video, Najib among others told Trump that Malaysia was interested to increase its investments in the US, as well as to purchase Boeing planes worth over US$10 billion in the next five years.
Najib’s brief stay in Washington was closely followed after it was revealed that the prime minister and his entourage had stayed at the Trump International Hotel, as well as claims that the US government did not pay for his accomodation due to the trip’s unofficial nature.
The Washington Post said the Malaysian entourage’s use of the Trump hotel had again raised questions of conflict of interest.
“Trump has come under fire for declining to divest of his interest in the hotel, which is now managed by his sons, creating opportunities for foreign governments and special interests to enrich the president while also seeking changes to US policy, in Najib’s case within a few minutes’ time,” the paper said.
Video Player