Is the Malaysian Indian Blueprint headed for failure? 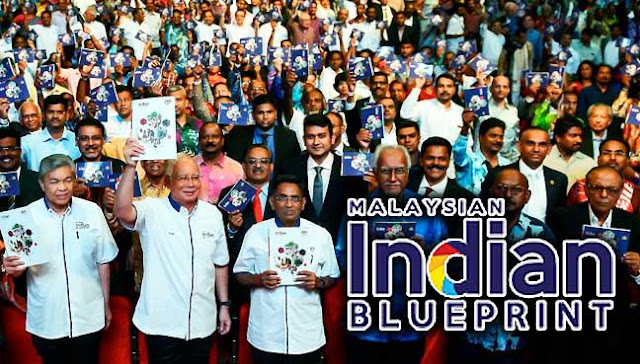 A Kumar
Since the launch of the Malaysian Indian Blueprint by the Prime Minister, much has been written about the pros and cons of the plan.
The opposition has been loud and vociferous in criticising it, claiming it is ill-devised and a propaganda tool for the 14th General Election which is expected to be held soon.


Yet many others were willing to see how the blueprint would be implemented before passing judgment. However, they too quickly changed their minds after trying to contact some of the key figures responsible for overseeing its implementation.
This is not because the blueprint is not good but because the attitude of some MIC members leave much to be desired. So too the Indian officials seconded to the Prime Minister’s Department, who were recommended by the MIC to oversee the programme’s implementation. Trying to get information from them is like trying to extract water from stone. Forget seeking an appointment with them because phone calls are ignored.
Many concerned Indians also fail to see why the government appointed former academics to certain posts, when they exhibit such hesitancy to offer help. These academics aren’t the most brilliant either, or even experts in development or Indian economic development in Malaysia, to be more precise. In fact, these academics were never even heard of till they were appointed to these positions.
Secondly, the blueprint is not inclusive of all Indians in Malaysia. As it stands, the blueprint only caters to the Hindu population. Granted, the largest portion of the Indian population are Hindus but other sections of the Indian community include the Christians, Sikhs and Buddhists, who have been forgotten.
The Indian Muslims have asked for Bumiputera status and the Prime Minister has promised to consider the issue. This group knows they are better off classified as Malays than Indians.
The policymakers, if they are serious about the Transformation Plan, must re-assess the Malaysian Indian Blueprint and include all sections of the Indian population.
Another body claiming to uplift and encourage Indian youths to better themselves, the Sri Murugan Centre, is also going on the same perilous path of not being inclusive.
As its name and logo implies, Murugan is a Hindu deity worshipped mainly by the Hindus, especially the Tamils.
The organisers of the Sri Murugan Centre when asked about their non-inclusiveness facetiously replied that they welcomed everyone to attend their programmes. Even those of other races. However, by replying in such a manner, they consciously succeeded in ignoring the elephant in the room.
It must be said that when the Prime Minister launched the Malaysian Indian Blueprint, he intended the programmes to be inclusive of all Indians.
Many years of planning and millions of dollars invested by the government may not achieve its aim because of men on the ground.
The Indian population in Malaysia is small, only about 7% and these high-handed implementers are fragmenting the population even further.
If these implementers do not wake up and realise that they were appointed to these positions to help all poor Indians regardless of religion and ethnicity, the Malaysian Indian Blueprint is bound to fail.
The government should rein in the implementers and closely scrutinise their activities. If they don’t, the government will very likely alienate many Indians and lose valuable Indian votes in the coming general election.
A Kumar is an FMT reader.
The views expressed are those of the authors and do not necessarily reflect those of FMT.