How the Najib White House jokes could have been avoided 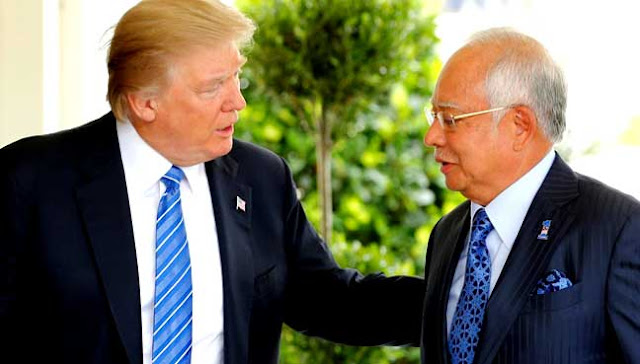 By TK Chua
There are enough jokes, parodies and satires about Prime Minister Najib Razak’s visit to the US.
In addition to those we joked about, I am sure the prime minister and US President Donald Trump discussed other “serious issues” which we ordinary citizens may not know of.
I think the problem boils down to discretion and advice the prime minister received from those accompanying him.
The jokes and parodies could have been avoided if the prime minister had chosen the right issues to emphasise during the brief “press opportunity” at the White House’s cabinet room. He could have said things in more generic and “national” terms, knowing that these are for public consumption.


Why give the US president and his cabinet minute details such as that Malaysia would be buying 25 Boeing 737 jets and eight 787 Dreamliners with another 25 Boeing 737s more to come in the near future?
By doing so, did Najib announce MAS’ business plan for the next five to 10 years to its competitors and the world? It sounds so desperate on our part when, in actual fact, Boeing and GE Aviation should be the ones running after us to get the deal.

A smart friend of mine told me this and I simply love it: “In business, if I want to buy one Toyota, I go to the showroom. If I want to buy 10, the agent will come running to my house! So, why the need to fly there and desperately beg to buy commercial planes from them?”
I think those overpaid and under-thinking advisers accompanying the prime minister are not doing their job. Even if they want to make the US president happy and “Make America Great Again”, they should find a more appropriate and subtle way. Washington is not interior Sarawak, if they know what I mean.
As for the potential investments by EPF and Khazanah Nasional in the US, again there was no necessity to go into the specifics. Subtlety is the key when handling market sensitive information, more so when Malaysia had just announced it was getting massive foreign loans to finance its own infrastructure projects.
Sure, EPF and Khazanah may need regional/international investment plans and portfolio diversifications, but there is no need to mention them specifically, nor the amounts involved. To do so only implies our subservient and “unworthy” status.
The prime minister could have conveyed many things couched in “public interest” statements and generalities. He could have said the visit, at the invitation of the US president, was to explore mutually beneficial trade and investment opportunities and to seek better cooperation on security matters.
Surely there are reciprocities in trade, investment and security issues that our prime minister could have emphasised? I am sure highlighting them is good for public perception.
Right now, I think our prime minister and his delegation are at the receiving end simply because they handled the international audience the way they handle the rural people in Peninsular Malaysia and the interior of Sarawak and Sabah.
Years of unrestrained power has made them insular, condescending and smug.
TK Chua is a FMT reader.
*The views expressed are those of the author and do not necessarily reflect those of FMT.