G25: The word ‘liberal’ has place of pride in Rukun Negara 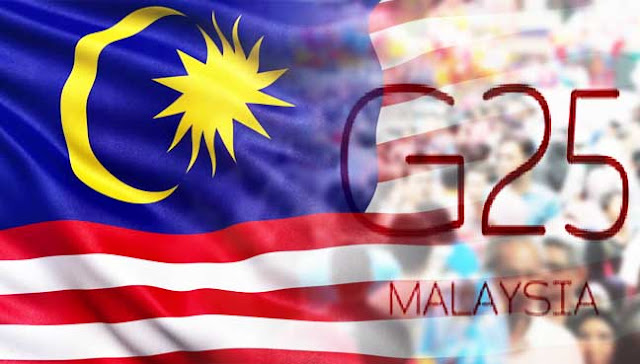 By G25
G25 has often been labelled as “liberal” by its critics, using a word which is becoming a derogatory term in Malaysia to describe Muslims who believe in the universal values of democracy, human rights, gender equality and respect for multiculturalism and diversity.
It is a word which has been abused by the religious authorities and extremists to demonise those who have different opinions on matters of race, religion and politics.


We, the members of G25, would like to remind our critics that in the Rukun Negara, the word “liberal” has a place of pride in the five principles of the national ideology aimed at bringing the various races together for national unity and development.
In the preamble to the Rukun Negara, it states that one of Malaysia’s aims are: “menjamin satu cara yang liberal terhadap tradisi-tradisi kebudayaannya yang kaya dan berbagai corak”.
In the English version, this is translated as: “Guaranteeing a liberal approach towards her rich and varied cultural traditions”.
Note that the word “liberal” is used in both versions in the context of something positive and beneficial to our ambitions to become a united, happy and prosperous country.
The members of G25 subscribe fully to the aims of the Rukun Negara and would like to take this opportunity to express our admiration that at the recent National Day parade at Dataran Merdeka in front the Yang di-Pertuan Agong to celebrate the 60th anniversary of our independence, the whole crowd from different races recited in unison the five principles of the national ideology, and waved the flag with pride and emotion that we have achieved so much to become a successful country.
While there is much to celebrate, there is also much to be concerned about regarding the growing intolerance for our differences. G25 observes that tolerance and respect for our diversity in languages, religions, cultures and traditions have been declining.
This is regrettable considering that diversity is universally recognised as a valuable asset among the factors for successful development. Indeed, it is for this reason that there is emphasis in the Rukun Negara to uphold the constitution and rule of law, so that we can protect the multicultural character of our population and human rights in the country.
This will also ensure moderation in the application of Islam in the daily lives of Muslims. We are encouraged that in his visit to the US recently, our prime minister reiterated to the world that Malaysia believes in moderation and diversity.
G25 has made several proposals for reforms in the administration of Islam and in the governance system of the country so that there will be transparency and accountability among public institutions in the running of the country.
Such openness will strengthen our democracy and protect citizens against abuse of power among those holding positions of authority. In view of the financial scandals happening in the public sector, there is urgency for reforms to cultivate a culture of integrity among all institutions of government.
We in G25 will defend the country’s secular democracy based on the Federal Constitution as the supreme law of the country. The constitution was written with the intention that while Islam is the religion of the federation, the laws of the country should follow the universal values of justice which were in existence long before independence.

The system of government provided for in the constitution is a government of the people, by the people and for the people, which means it is the rakyat who ultimately decide how they should be ruled.
Our nation’s founding fathers decided this formula was the best for our multiracial country. They have been proven right. With a constitution that satisfies the aspirations of all races for a united country, Malaysia has remained a peaceful country, making it one of the most successful countries in the developing world.
We the members of G25 recognise that as Muslims, we must respect the status of Islam as the religion of the country. We urge the ummah to practise the teachings of our religion faithfully in order to be blessed by God in this world and hereafter.
All Muslims must observe the five pillars of our faith and avoid the sins forbidden by God in the Quran. We are also aware that we must respect the role of religious institutions in guiding Muslims towards the right path. We acknowledge that under the Federal Constitution, Islam is the religion of the country and that the constitution grants authority for the administration of religion to the states.
On the other hand, when religious authorities go beyond the limits of the constitution in exercising their powers, and introduce laws to control and police the behaviour of Muslims against the principles of democracy and human rights, G25 has a duty to respond by raising the issues of law and order on behalf of the moderates and the silent majority.
We believe that in line with the constitutional guarantee on the freedom of speech and expression, we are free to comment and oppose when it is necessary to do so for the benefit of society and the country.

G25 wishes to make it clear that we do not condone the permissive and sinful behaviours that are detrimental to our religious values, and which are also alien to Malaysian cultural norms and etiquette.
In Islam, homosexuality, free sex, adultery and liquor are all sinful and forbidden. We agree it is not wise for Muslims to raise doubts about Islamic rituals such as the korban in a manner that arouses anger in the community. We also disassociate ourselves from those who question the validity of the Quran or its divine purity as happened during a public forum recently.
G25 has been consistent in its view that while these deviations in behaviour and belief are forbidden in Islam, they are personal sins and therefore, they should not be criminalised under any law. We are not alone in taking this view.
It is a view which is similar to the opinions of many Muslim scholars and constitutional lawyers who say LGBT, free sex etc are wrong but that these are personal sins, not crimes as defined in constitutional law. Let God punish those who disobey his commands.
The nation state should concentrate on its basic role of providing for the basic human needs of the people and ensuring security, fairness and justice for all. This concept of responsibility of the modern state is in line with the principles of Wassatiyah and Maqasid Syariah.
On the criticism against G25 regarding its book “Breaking the Silence: Islam in a Constitutional Democracy” and the recent public forum at which an invited foreign professor was a speaker, we would like the authorities to accept the reality that there are bound to be differences of opinion when scholars from different backgrounds and countries meet in open debates.
Some of their views may be very controversial and radical, such as often seen on social media, where eminent scholars at the highest centres of learning in the West, with all the freedom that they have to express themselves freely and openly, interpret the spiritual meanings in the holy texts in ways which we in Malaysia would regard as unacceptable.
Our religious authorities should tolerate the differences of views as a healthy sign that Muslim scholars are contributing their knowledge towards a deeper understanding of Islam.
We should learn from history that in the Islamic world during its golden age of knowledge and discovery over a thousand years ago, Muslim scholars and philosophers in the ancient universities of Damascus and Cairo debated among themselves in search of answers to some of the mysteries in religion.
They studied the works of ancient Greek philosophers before them and through the openness of their scholarly findings, they influenced major changes in the application of religion to human life.
Their brave new ideas in interpreting religion were copied in Christian Europe and led to the Renaissance, which transformed Western society from the medieval attitudes of blind obedience to progressive thinking about new solutions for the changing circumstances. The Reformation that followed swept across Europe, modernising and empowering the Western world in all fields of human endeavour.
The Muslim world, on the other hand, after a brief period of reforms and modernisation, reversed itself from the progressive approach and went back into conservatism in religion, and as a consequence, it lagged behind the Western world in all areas of human development. The lack of openness to different ideas remains a major reason for backwardness in many Muslim countries.
G25 believes in being friendly to all so that we can be open in expressing our views. In a democracy, openness is common practice and has become an important factor in the successful development of many countries.
In most countries, civil society organisations are accepted as partners with the government in finding solutions for the good of the nation. Such partnership is the best way to facilitate the reforms and changes needed for the country to accelerate its development process to become a high income country, with advanced social and cultural values of respect and tolerance for our differences.
G25 is a movement of eminent Malay moderates.
The views expressed are those of the authors and do not necessarily reflect those of FMT.