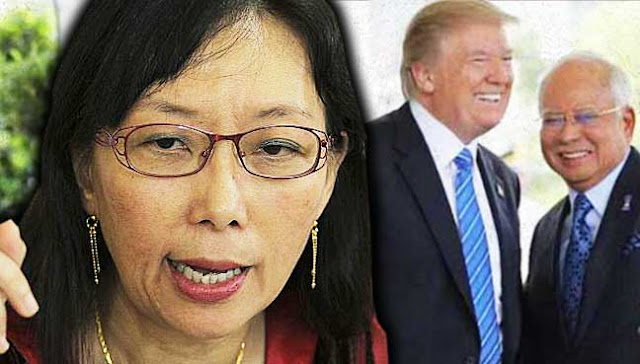 PETALING JAYA: Seputeh MP Teresa Kok has questioned Prime Minister Najib Razak’s financial commitments to the United States, asking if they were made in exchange for greater investments in turn from the US.
In a statement today, the DAP vice-chairman asked if Najib’s visit to the US was a “shopping trip” to show Washington that Malaysia could be a good buyer of American-made planes.


“Is Malaysia that cash-rich that it can afford to buy 25 Boeing planes plus eight 787 Dreamliners in the near future, as well as investing in infrastructure development in US now?
“Will these purchases and investments help to boost the current weak economic situation in Malaysia, or are they in exchange for greater investment from the US?”
Kok’s questions followed reports today that Najib, who is currently visiting the White House, had told US President Donald Trump that Malaysia Airlines would buy 25 Boeing 737 jets and eight 787 Dreamliners, and would probably add another 25 737s in the near future.
The deal would be worth more than US$10 billion within five years, he said, adding that the Employees Provident Fund (EPF) wanted to spend another US$3 billion to US$4 billion on US infrastructure development.

Kok said she was “appalled” by the prime minister’s proposals, which she added came as Malaysians were suffering from financial difficulties due to the economic slowdown.
Pointing out that Malaysia Airlines was still struggling to recover from its massive debts and deficits, she asked whether the national carrier was in any position to spend US$10 billion on the 25 Boeings.
She also asked if Najib could use EPF funds of RM16.8 billion to invest in US infrastructure development without consulting the fund’s contributors.
“What sort of returns are the EPF contributors going to get out of this investment?” she said.
“Malaysians have a right to know what sort of possible investment benefits and returns Najib has brought back to Malaysia, considering that millions was spent by the Prime Minister and his entourage on this US trip.”