Dr Mahathir should have asked us, says airline boss 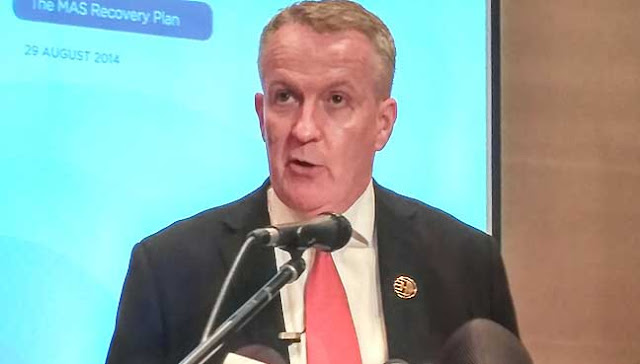 PETALING JAYA: Malaysia Airlines CEO Peter Bellew has accused Pakatan Harapan chairman Dr Mahathir Mohamad of making inaccurate statements in a recent blog post.
In the post, Mahathir, who is also PPBM chairman, asked if the airline’s management had agreed to the purchase of the Boeing aircraft for the wrong reasons.
“It doesn’t speak well of the management to suddenly expand its routes with these huge aircraft. Or is MAS trying to please the PM at the expense of commercial wisdom?” he had said.

Speaking to reporters at the Malaysia Airlines Academy here today, Bellew said Malaysia Airlines had been talking about buying Boeing aircraft for months before Prime Minister Najib Razak struck the deal during his US visit.
“Although I have tremendous respect for him for what he’s done in the past, the fact is that he didn’t check with any of us before making the blog post,” Bellew said.
He said the reason the airline needed to acquire new aircraft was because many of the aircraft it presently had would soon become unusable.
In his blog post, Mahathir had also written, “Is MAS going to buy Airbus A350-900 or Boeing 787 Dreamliner or both? Was there a decision made by MAS to buy the 58 Boeings, or was this a personal decision by Najib as a bribe to get a photo opportunity with Trump?”
Bellew explained that in order to replace its widebody aircraft as well as to balance the fleet between roughly 50/50 widebody and narrowbody aircraft, the airline was looking at both the Airbus A330neo and Boeing 787 Dreamliner, but would also be acquiring the A350s to replace the soon-to-be unusable A380s.
Bellew said Boeing was chosen because of the good offer it had given and because the A330neo was not out yet.
“We will also be taking in A350s to replace our existing A380s.”
Bellew said the confusion arose after he had been reported as saying that MAS would not be buying the Boeings but leasing it as an operational lease.
“This helps us save cost because as an airline we are able to buy these planes for cheaper and then sell it to a leaser and then lease it from them,” he said.
Bellew was reported as saying that the airline would not be buying and owning the Boeings that the government had promised to purchase.
“These aircraft will not be owned by Malaysia Airlines, but are planned to be on operating leases, which is a norm in modern airlines,” Bellew had said in an internal memo dated Sept 15, which was sighted by business publication The Malaysian Reserve.
To Mahathir’s question as to where all these planes would fly to, Bellew said the Boeings could fly from Kuala Lumpur all the way to California in a single trip at maximum load.
“We could if we wanted to but I’m not saying we do or don’t want to.
“It leaves the future wide open… and saves cost not only for long trips but also trips to places like Seoul and Beijing.”