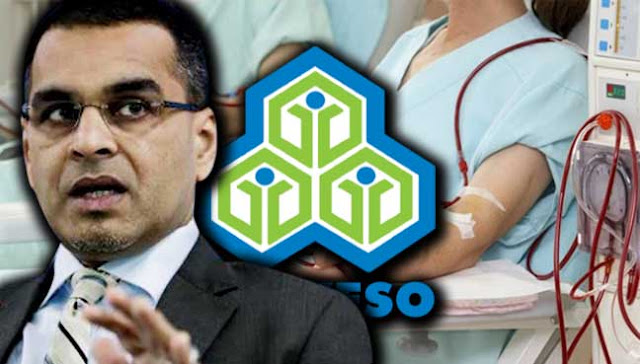 PETALING JAYA: Last year, the Social Security Organisation (Socso) disbursed a whopping RM197.5 million in financial aid for dialysis treatment.
Socso is bracing itself to pay even more this year, says its CEO Dr Mohammed Azman Aziz Mohammed.
To put it in perspective, this amount is close to the RM200 million which Putrajaya allocated this year for nutritional food packages for the benefit of 280,000 preschool children in the country.

For those into cars, that amount of money can buy you 8,229 Perodua Axia, the most affordable car in the country.
Sadly, unhealthy lifestyles, which cause non-communicable diseases (NCD) like kidney disease that require dialysis treatment, is what’s really costing Socso.
In fact, over a period of five years, there was an 87% increase in the number of aid recipients for dialysis, from 7,468 in 2012 to 14,023 in 2016.
And the number keeps increasing. On average, Socso accepts an average of 1,800 new recipients for dialysis aid a year.
Treatment per patient is estimated at RM14,000 per year.
As of Aug 31, the total number of dialysis aid recipients stood at 15,454.
“If this trend continues, the amount of compensation from the invalidity pension scheme will continue to rise, matching the total amount of contributions.”
Azman said NCD is a major determinant of invalidity and death among workers in the country.
He said 65% of those requiring dialysis are those aged between 41 and 60. More than half of them are males.
“However, it is also alarming that a high number of younger workers are also becoming affected, with those aged 31 to 40 accounting for 15% of the total number of dialysis aid recipients.”
Companies need to play an active role
Azman said dealing with NCD required the effort and cooperation of all parties, with employers needing to play a major role.
“Companies can no longer ignore the issue as purely something that should only be handled by the health authorities.”
In fact, Azman said the workplace was the perfect setting for health initiatives to be executed as most employees spent their waking hours at work.
“So companies can start to turn workplaces into centres for healthy living through health-related office policies.
“They could ensure a smoke-free environment, promote healthy diets at staff cafes, allocate time for physical activities and stress management exercises.
“Some of these can be implemented at minimal cost and only require careful planning and commitment.”
Azman also said bosses can encourage their employees to undergo health screening at least once a year or provide facilities for their employees to do so.
He added that Socso was working with the health ministry to provide consultation for employers who want to implement a workplace health promotion programme.
“Since 2013, we’ve offered free health screening vouchers.
“Sadly, only 20% of people take up this offer, despite the fact that they don’t have to pay for it and the screening can be done at 3,200 private clinics nationwide.”
He said Socso’s surveys indicate that employees are hesitant about undergoing health screening.
Those who took up the offer for these free health checks, often delayed going for the screening for four to six months after receiving the vouchers.
Azman said other reasons cited by employees for not going for the free health screenings included lack of free time, employers not allowing their workers to go for screening during working days, and not being aware of the programme’s existence.
“Knowing your health status doesn’t mean there is now a new burden. It allows you to take better care of yourself.”
In recent times, some health and consumer groups have called for strict measures to deal with NCDs like kidney disease, diabetes and hypertension. Among the suggestions were introducing sugar and salt taxes.
Earlier this year, Deputy Health Minister Dr Hilmi Yahaya said kidney failure cases due to diabetes in the country was on the rise.
He said if the current unhealthy trend is not tackled, the country will be among the top in the world, with the highest number of cases by 2030.