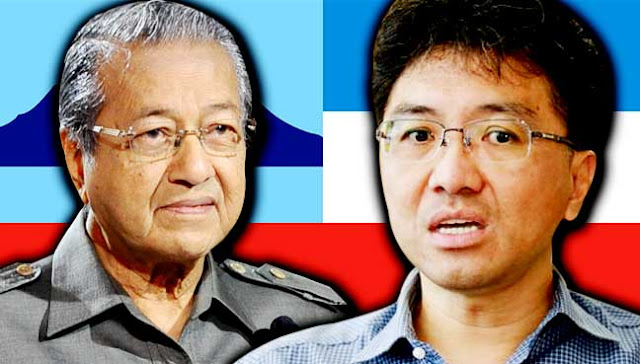 KOTA KINABALU: Sabah Deputy Chief Minister Raymond Tan has dismissed Pakatan Harapan’s (PH) supposed new deal for Sabah in its newly-launched manifesto, accusing the opposition coalition of concocting a scheme to erode the state’s existing special rights.
Tan was commenting on PH’s aim to review the 1963 Malaysia Agreement (MA63) and renegotiate with Sabah and Sarawak a “new fair deal” if the coalition wins the upcoming election.
PH chairman Dr Mahathir Mohamad was reported to have said recently that the coalition would change some of the provisions of the Malaysian constitution so that all regions – Sabah, Sarawak and Peninsular Malaysia – would be treated fairly.
“It is so unbelievable when Mahathir said there are many things that we can do by revising the original MA63 between Sabah, Sarawak and Peninsular Malaysia,” Tan told reporters here today.
“First, he got it wrong that MA63, signed on July 9, 1963, is only a tripartite agreement and an ordinary one that we can simply make changes to. Perhaps he has not even sighted or read the agreement.
“MA63 has provided the legal foundation that created Malaysia as a nation and attached in its annexures are the constitutions of Malaysia, Sabah and Sarawak. MA63 cannot be simply rewritten or replaced.
“It is a lie to say that there are many things we can do by revising MA63 and he gets dangerously close to not recognising the formation of Malaysia and is also in total disregard of the history of the nation.”
Mahathir not aware of inter-government committee of 1962
According to Tan, Mahathir was not aware that there was an inter-government committee in 1962 with the British, Malaya, North Borneo (Sabah) and Sarawak governments to work out the future constitutional arrangements, including safeguards for the special interests of Sabah and Sarawak, to cover all matters such as religious freedom, education, representation in the federal Parliament, the position of the indigenous races, control of immigration, citizenship and the state constitutions.
“The report of the committee was signed on Feb 27, 1963,” Tan said. “Chapter 3 and Annexes A and B of the report set out the legislative lists of powers, administrative arrangements and assurances for Sabah and Sarawak.
“It is important to note that these special rights are valid and enforceable even if they are not expressly provided for under the constitution. This is stated in Article VIII of the Malaysia Agreement.
“There is so much more interest and awareness among many political parties in Sabah of the state’s special rights. Most of us do not ask for anything more but we want to protect our special rights.
“Nobody in Sabah in his right mind would be interested in renegotiating a new deal with Mahathir or PH.”
Tan pointed out one case in 1983 when then-prime minister Mahathir revoked a legislative right of Sabah provided for under MA63.
“He did so without going to Parliament and was only using Article 95C of the federal constitution,” Tan recalled.
“This was with regard to the state’s legislative rights on electricity, gas and gas works as well as other works for the production and distribution of power and energy.
“Action is being taken now to correct this abuse he committed as head of the federal government.”
PH using ingenious propaganda about downgrading of Sabah, Sarawak
Tan insisted that as far as Sabah was concerned, the state had to protect its special position, together with Sarawak in the federation of Malaysia because of these special rights.
“In this respect, we are more superior than Selangor, Penang and Kelantan, which are under the PH and PAS governments,” Tan said.
“It does not matter if you put us last on the list of states in Malaysia, arranged in alphabetical order in the Federal Constitution in 1976, as long as we have special rights.
“It is PH’s propaganda ingenuity to say Sabah and Sarawak have been ‘downgraded’ because we are not at the top of the list of states in Malaysia.


“Is PH making this excuse as a reason to remove the special rights of Sabah and Sarawak which, in Mahathir’s words, are fair for all three regions?”
Tan also recalled Mahathir’s national integration campaign in 1996 when he proposed that Sabah and Sarawak surrender their immigration rights so that Malaysians from the peninsula could enter the states without a passport.
The proposal was also to revoke the states’ rights to ban the entry of people they deemed undesirable from the peninsula.
“Fortunately, the states’ leadership maintained our special rights.
“I believe Mahathir and other PH leaders have plans to remove our immigration rights. There are so many complaints from their leaders (regarding the states’ current travel bans against them),” rebuked Tan.
Mahathir has never acknowledged special positions of Sabah and Sarawak
Mahathir reportedly said that Parliament had been used to pass laws and policies, with the three regions no longer having such power.
“In Parliament, surely the number of representatives from Sabah and Sarawak is smaller than that from the peninsula.
“Mahathir has come close to proposing more parliamentary seats for Sabah and Sarawak,” Tan said.
“Instead of proposing this as the new deal, he only said PH would review some of the laws and agreements relating to Sabah and Sarawak, such as the Petroleum Development Act 1974 and Territorial Sea Act 2012.
“If these laws were passed against the constitutional rights of Sabah and Sarawak, they would be invalid and not enforceable anyway.
“Mahathir said it was wrong when there were no negotiations with the two states to pass laws and policies in Parliament, especially if they would affect Sabah and Sarawak.
“So far, it is hard to find any laws or policies that were passed by Parliament only after consultation with the states when he was prime minister. He never did so because he had never acknowledged the special positions of Sabah and Sarawak before.
“He is proposing to review the MA63 and change some of the provisions of the Malaysian constitution, but not in the best interests of Sabah and Sarawak.
“Even more unbelievable is when he, together with (DAP adviser) Lim Kit Siang, said it is a new deal for Sabah and Sarawak.”
Tan, who is also Gerakan vice-president, dismissed Lim’s call for Sabah and Sarawak to give PH two-thirds majority in Parliament.
“First, it is clear that the new deal is on condition that PH wins 40 parliamentary seats in Sabah and Sarawak,” said Tan.
“The priority is PH getting to Putrajaya and clearly PH has no interest in the states at all. After all, the Sarawak state government is already under BN rule and so is Sabah.
“Kit Siang never mentioned the special rights of Sabah and Sarawak under the MA63 and the Federal Constitution. So no details were given by him as to what review PH is going to do anyway.”
-FMT NEWS-