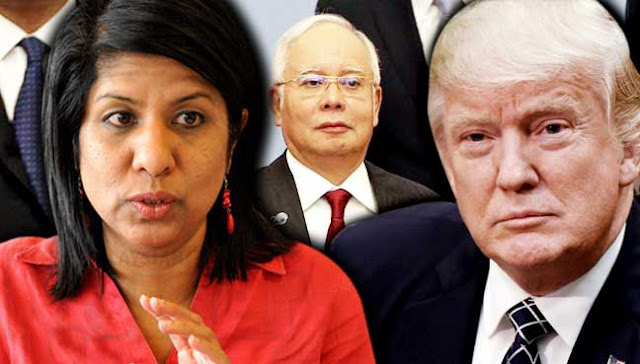 PETALING JAYA: A local anti-corruption activist has criticised the United States over its decision to invite Prime Minister Najib Razak to meet with US President Donald Trump at the White House, calling it “a terrible idea”.
Cynthia Gabriel, who is founder of the Center to Combat Corruption and Cronyism (C4), wrote in a commentary published in The Washington Post yesterday that the invite was a “gigantic gift for Najib”.

“Trump rolling out the red carpet for Najib on Sept 12, is a terrible idea. It is a gigantic gift for Najib, who is suffering from a profound crisis of credibility at home as he prepares for a general election that is likely to come later this year.
“Malaysians were flabbergasted to hear that the US president had singled out the prime minister for this privilege.
“This is especially since it was a little more than one year ago that the Department of Justice (DoJ) announced that it was filing civil forfeiture suits targeting 1MDB, the country’s sovereign wealth fund, which was founded by Najib and is controlled by his government,” Gabriel said.
It was previously reported that the DoJ charged that from 2009 through 2015, more than US$4.5 billion (RM19 billion) belonging to 1MDB had been diverted by high-level officials of the fund and their associates.
“Malaysia’s authoritarian system makes it extremely difficult to demand the needed accountability, and the mainstream media in the country have correspondingly stopped reporting about the subject.
“So, why would the White House deem it appropriate to invite a leader who is potentially implicated in one of the largest corruption cases the DoJ has ever launched?” she asked.
Gabriel also speculated that it was Trump’s own position when it comes to the rule of law, and his lack of adherence to what is accepted practice as president, that has seen Najib being welcomed to Washington on an official visit.

“Since assuming office this year, Trump has openly defied long-established norms on conflict of interest that his predecessors of both parties observed.
“He has refused to divest himself of his international real estate holdings and licensing companies, and he has appointed members of his family, who have their own myriad conflicts of interest, to important posts in his administration,” Gabriel said.
As a result, Gabriel said Malaysian journalists are now wondering whether Najib will use the visit to press Trump to drop the 1MDB probe.
“Najib is keen to show Malaysians that the US authorities are not after him,” she said.
Gabriel criticised the White House for demonstrating by its actions that it did not care about the bane of corruption around the world.
She feared that the visit will ultimately free Najib from any sense of accountability from his alleged actions linked to the investigations into the 1MDB scandal in a number of countries, including Switzerland and Singapore.
“Now Najib will be able to triumphantly dismiss his critics at home who have cited the DoJ investigation as confirmation that the Americans regard him as a wanted man.”