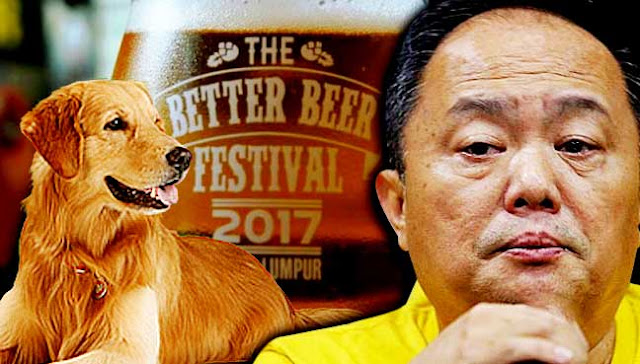 By Thomas Fann
At best, I would consider myself a social drinker – a very occasional glass of wine with a meal and, at most, a few pints of beer a year, never to the point of intoxication.


Thus, the reason I view with great concern the cancellation by the Kuala Lumpur City Hall (DBKL) of the Better Beer Festival in Kuala Lumpur which was slated to be held on the weekend of Oct 6 and 7, is not selfish but for the direction in which this country is heading.
I am not concerned that religionists raise objections or even organise protests against events deemed “sinful” as this is within anyone’s right to do, but for a local authority that is supposed to regulate based on health, public order and safety criteria, to fulfil the demands of any religious group is going beyond its mandate in a pluralistic society like Malaysia.
The objection to the annual Better Beer Festival was raised by Islamist political party PAS in its news platform HarakahDaily on the grounds that “it is something shameful for an Islamic country like Malaysia, when treacherous programmes can easily gain a place in the society’s heart and it is allowed to be organised without obstruction”.
PAS further added that Kuala Lumpur may become known by the world as the biggest centre of vice in Asia as such events can lead to crime, free sex, rape and so on. It also warned “that there could be extremist actions when society is unable to accept the treachery and feels under pressure”.
Come on, let’s get real.
A weekend event at a posh shopping centre in Kuala Lumpur to showcase 250 varieties of craft beer (beers brewed by small breweries) from around the world can lead to free sex and rape on the floors of the shopping centre and make the city known as the vice capital of Asia? I doubt so. What it is making us out to be, is being the biggest laughing stock in the world, thanks to such outlandish claims.
Low-hanging fruit
There is no denying that binge drinking and alcoholism is a problem in many families and certain communities in Malaysia, and the promotion of alcoholic beverages to the general population can lead to negative social effects. Personally, I support efforts to make alcohol consumption less accessible to vulnerable groups either by raising the cost or banning its sale to underage persons.

There are already laws in place to deal with problem drinking, and surely that would be a better way to deal with it than to prohibit it. Apart from the prohibition of alcohol consumption for Muslims, which is punishable under shariah law, civil laws criminalise public drunkenness, the selling of alcohol to minors and drunken driving.


If there are public order concerns in connection with the Better Beer Festival, DBKL should set the parameters for the organisers to ensure that the event will not lead to such public disorder, instead of outright banning it and denying the right and enjoyment of responsible social drinkers whom this event is clearly targeting.
The fact that excessive alcohol consumption can lead to social ills and that many of Malaysia’s religious groups, not just the Muslims, either deem it sinful or not something to be promoted, makes the banning of the Better Beer Festival a non-issue or an action that is applauded by many. It is a low-hanging fruit for religionists to rally support against, using alcohol’s negative effects as a front when their real agenda is the Islamisation of Malaysia.
What’s next?
My concern is, now that they have become emboldened with this “success”, what will their next target be? Will it be the closure of all pubs and bars and the eventual outlawing of alcohol? The example of the US’ attempt in the 1920s to prohibit alcohol consumption, termed “the noble experiment”, was a miserable failure. Far from achieving its goal of reducing crime, it increased criminal activities and enriched criminal warlords. It drove the production and consumption of alcohol underground where it was beyond the control of the government and beyond taxation, making it cheaper for consumers.
Is alcohol the only item that Islamists find offensive? What is next? Banning the consumption of pork, keeping dogs, the display of any graven images or symbols (like statues, sculptures, idols, crosses), un-Islamic attire, un-Islamic music and instruments and non-Islamic festivals like Christmas, Thaipusam, Wesak, Chinese New Year and Kaamatan (Harvest)?
As it is now, we are already facing the creeping Islamisation of our public services like dress codes at government departments, education curriculums, local authority policies and guidelines.
Protecting the minorities
When are we going to draw a clear line between what is a religious conviction and what is civil (common to the general population)? Are we interested in protecting the rights of all citizens, especially the minorities among us? Or are we willing to allow the homogenisation of every citizen into the image of what is acceptable to the extremists among us, thereby destroying the diversity of our society?
The banning of the Better Beer Festival is not a public order issue, nor is it a tourism issue. It is about the preservation of Malaysia as a multicultural nation where the rights of every minority are protected so long as the exercising of such rights does not impinge on the rights of others. Anyone not into drinking beer need not attend the festival, and no one should be forced to drink just as no one should force their convictions on others.
In the words of Ayn Rand, the novelist and philosopher, “Individual rights are not subject to a public vote; a majority has no right to vote away the rights of a minority; the political function of rights is precisely to protect minorities from oppression by majorities (and the smallest minority on earth is the individual).”
If we want others to respect our rights, then respect the rights of others, even if we disagree with them. Do to others what we would want others to do unto us.
Thomas Fann is a social activist and chairperson of Engage, an NGO involved in strengthening democracy, defending human rights, promoting social justice and protecting the environment.
The views expressed are those of the authors and do not necessarily reflect those of FMT.