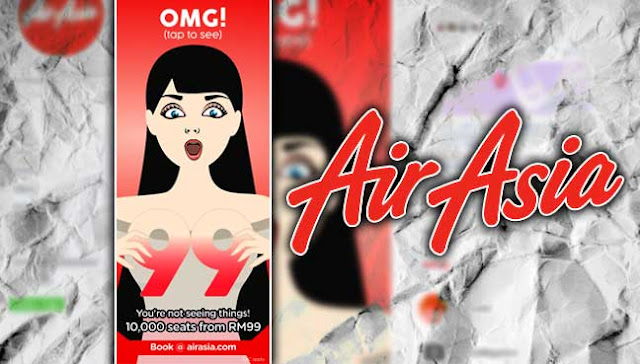 PETALING JAYA: Low-cost airline AirAsia has come under fire from social media users over an advertisement deemed sexually connotative.
The advertisement, posted on AirAsia’s Facebook page today, features a drawing of a woman with two semi-circles on her chest area.
A caption above her head reads: “OMG! (tap to see)”.
Only when the thumbnail is clicked is it revealed that the semi-circles are the tops of two figure nines, which the woman is holding up to show “99”.


At the bottom of the picture, a line reads: “You’re not seeing things! 10,000 seats from RM99. Book @ airasia.com.”
The advertisement was slammed for its suggestiveness, with 137 comments and 72 shares at the time of writing.
Jeffrey Wah said: “i dont think using this approach is appropriate, i was shocked because this look so low class and seems gender discrimination.”
Jeshua P Kong said: “oh my god. i can’t believe such a famous and supposedly progressive brand made such a primitive ad. really #shame on you #AirAsia.”
Louise Cheang Oi Ling agreed, saying: “seriously, why using a inflatable doll facial expression with her holding the 99 in front of the chest? I am not a narrow minded person, but this is really the lowest class ad i have ever seen from you guys #AirAsia you need to fire your marketing team for approving such ad.”
“Bringing AA’s marketing to a new low,” Firdaus Razak added.
However, some defended the advertisement, saying it was meant to be light-hearted.
D Yuen Chee Meng said: “Come on.. it’s just a cartoon. Some of you think too much and make things complicated. I don’t find anything wrong.”
Another user joked that he thought the numbers would be “00”, meaning that the flights were free.
“Damn.. i got betrayed,” he quipped.
Martin Kuah meanwhile said: “So many extremists here. If you cannot accept a joke, better stay in a cave.”
Others such as Soo Ao Long Tian appeared undisturbed by the advertisement but complained that the AirAsia website did not reflect the prices promoted in the poster.
In a statement following the backlash, AirAsia said the advertisement had been removed upon review.
It also apologised for the inconvenience caused.