A cheap shot from Pakatan 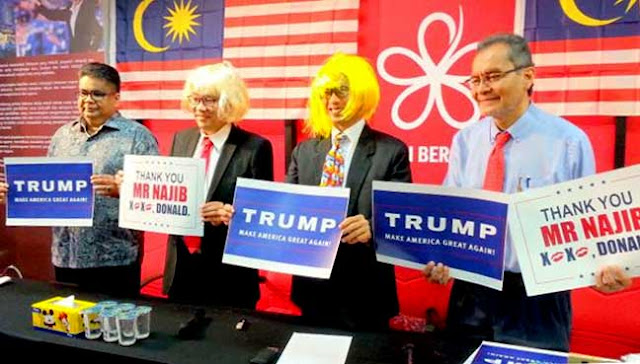 Prime Minister Najib Razak’s recent visit to the White House and its outcome presented what seemed like a golden opportunity for Pakatan Harapan to criticise him harshly, and that is what it has done.
It’s fair to say that a lot of these criticisms had been thought through rather well. For example, Najib was roasted for promising to take foreign investment to the US instead of bringing home US investment.
However, the intelligent criticisms have been hijacked by one move that has no class.
We’d like to know who it was who thought it was a good idea to make Pakatan politicians put on wigs during a press conference to mock US President Donald Trump, who, as everyone knows, wears a toupee.

This is the type of monkeying one would expect from Red Shirt leader Jamal Yunos, not from members of a coalition many believe is a credible alternative to the Barisan Nasional government.
Trump may not be the most beloved political figure around, but, of all things, to poke fun at his appearance – or anyone’s for that matter – is certainly cringe worthy.
The fact that Pakatan needs to look its best at a time when a general election is around the corner and when the whole world is looking at Malaysia truly makes this a stupid move.
Didn’t Pakatan realise it was being cheap and that the caper distracted, in a most uncomfortable way, from the seriousness of the message it was trying to put across? Reporters were horrified by the absurdity and indignity of it all. And now that horror is passed on to readers.
Pakatan often criticises the BN government by contrasting its practices with the mature democratic practices of the developed countries. Well, we can now compare Pakatan with the opposition parties of those countries to see how it measures up in maturity.
Perhaps the politicians seen in those ridiculous wigs should fade into the background for a while and pray that the world, or at least Malaysians, will forget all this ever happened.
-FMT NEWS-