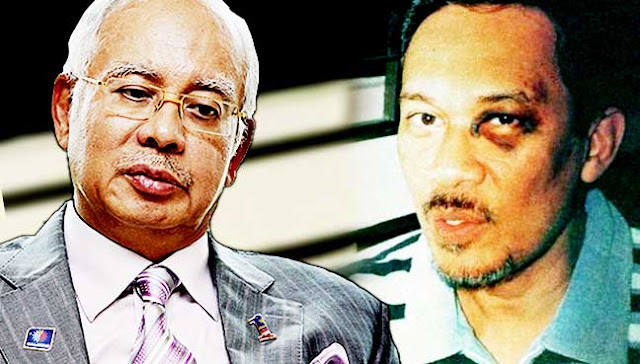 PETALING JAYA: The black eye suffered by former deputy prime minister Anwar Ibrahim almost cost him his Pekan parliamentary seat, Prime Minister Najib Razak recalled today.
This was due to a voter backlash after Anwar emerged with a bruised eye while under police detention at that time.
The Umno president said the near-defeat was the most unforgettable experience he had.
“The nightmare of 1999 happened because the black-eye incident made us victims,” he was quoted as saying by Bernama.
He added that he had to bear the brunt of the people’s reaction although someone else had been responsible for the injury.
The infamous “black-eye” incident happened a few weeks after Anwar was fired from the government by then prime minister Dr Mahathir Mohamad.
Former inspector-general of police Abdul Rahim Noor was later sentenced to two months’ jail and fined RM2,000 for hitting Anwar after the Court of Appeal upheld the sentence in April 2001.
Anwar appeared at the Kuala Lumpur court with the injury on Sept 29, 1998, when he was brought there by police from Bukit Aman where he was kept after his arrest.
He pleaded innocent to charges of corruption and sodomy.
The picture of Anwar, with the bruised eye and raising his hand in defiance, became an iconic image of the opposition Reformasi movement that rallied for him to be freed.
Both Mahathir, who is today chairman of Pakatan Harapan (PH) and PPBM, and Anwar, the de facto head of PH and PKR, are now in an alliance to topple Najib and BN from the federal government in the upcoming 14th general election.
Najib was speaking while officiating at the Pekan Umno delegates meeting at the Sultan Haji Ahmad Shah Convention Hall in Pekan today.
Najib reminded the delegates that the near-defeat was a lesson for them to work hard to defend the constituency which he won by a record majority of 35,613 votes in the last general election of May 2013.
In 1999, Najib had retained the Pekan seat by edging out Ramli Mohamed of PAS with a majority of 241 votes from the 26,055 valid votes cast.
He first won the seat in 1976 and has held it since, except for the period between 1982 and 1986. In the 1982 general election, he ran for a state seat and became Pahang menteri besar for one term.
Mahathir has previously been reported as saying that Najib won the seat in 1999 by the slimmest of margins thanks to late votes from Orang Asli and army personnel.
“In 1999, when he almost lost in Pekan, he resorted to bringing in Orang Asli people and soldiers, and they were forced to support him.
“As a result, he won with just 200 votes,” Mahathir reportedly said at a ceramah organised by PPBM in February this year.
Umno treasurer Salleh Said Keruak, who is communications and multimedia minister, retorted that Mahathir was “scraping the bottom of the barrel” to find something with which to paint Najib as an unworthy prime minister.
He said Mahathir could not be taken seriously and recalled that the claim of alleged cheating in Pekan was first made by the opposition 18 years ago.
Share to: