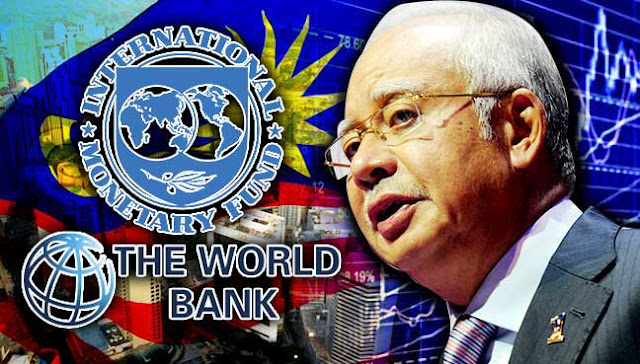 PETALING JAYA: The International Monetary Fund (IMF) and the World Bank’s move to raise their projections for Malaysia’s growth this year is an endorsement that the country is on the right track to achieve high growth and defy the naysayers, Prime Minister Najib Razak said today.
The IMF raised Malaysia’s gross domestic product (GDP) growth projection for this year to 4.8% from 4.5% previously, while the World Bank revised it to 4.9% from 4.3%.
Malaysia registered a GDP of 5.6% for the first quarter of 2017 and beat expectations for the second quarter with growth of 5.8%, said Najib.

“Just yesterday, Fitch Ratings reaffirmed Malaysia’s rating with a stable outlook, citing our strong GDP growth, sustained current account surpluses and the country’s net external creditor position, as key drivers,” he said in his speech at the 63rd Master Builders Association Malaysia (MBAM) Anniversary Dinner celebration here.
Hence, Najib, who is also the finance minister, urged the people not to listen to those who spread fake news about Malaysia.
“The truth is as the most recent report from the World Bank concluded and I quote, ‘the Malaysian economy is progressing from a position of strength’,” he said.
The prime minister also said some people have tried to suggest that only foreigners would benefit from projects in the country.
“Nothing could be further from the truth,” he stressed.
He said of the RM21 billion worth of contracts for the recently opened Sungai Buloh-Kajang MRT Line, RM17 billion was given to Malaysian firms. For the upcoming Sungai Buloh-Serdang-Putrajaya Line, RM26.7 billion of the RM30 billion contracts awarded to date, have been to Malaysians.

“The ECRL is a game-changer that will stimulate investments, spur commercial activities, create thousands of jobs, facilitate quality education and boost tourism in Pahang, Terengganu, Kelantan, as well as guarantee 30% involvement for local contractors.
“If we take the Pan Borneo Highway as another example, when work packages under phase one of the Sarawak section were announced last December, a majority was won by local firms and their joint ventures, securing RM10 billion of the RM16.5 billion funds allocated,” he added.
When congratulating the MBAM at its celebration tonight, Najib said the association will help make Malaysia’s construction industry world class.
According to the PM, as of March 2017, Malaysian contractors had secured projects worth more than RM18.5 billion in India, RM16.6 billion in a number of Asean countries and RM12.4 billion in Saudi Arabia.
“This is proof that the capabilities and experience of Malaysian contractors, combined with the strong international ties that I have forged, can bring economic growth to the nation as a whole,” he said.
With a membership of more than 14,000 companies and groups, the MBAM has played a key role in the sector which is expected to grow by 8% in 2017.
The construction industry will continue to register robust growth over the next five years, boosted in part by the infrastructure projects being implemented by the government across the country.
The projects include the ECRL, the Kuala Lumpur-Singapore High-Speed Rail, the Pan Borneo Highway, KL118 and the Refinery and Petrochemical Integrated Development Project in Johor.